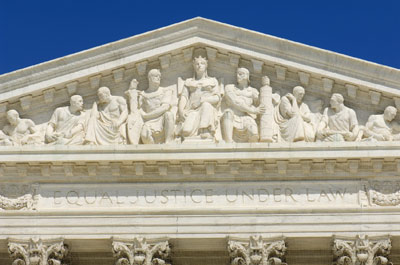 The Supreme Court has been divided on whether Campaign Finance Reform prevents corruption enough to justify infringing on free speech.
©iStockphoto/Joanna Pecha

The constitutionality of campaign finance reform has been debated for decades now. The issue has made its way to the final authority -- the U.S. Supreme Court.

Back in the 1970s, Congress started passing significant campaign finance restrictions. A few years later, the Watergate scandal broke, leaving Congress with the difficult task of trying to restore public faith in public servants. So, it added even stricter amendments to the legislation. To eliminate bribery, these laws set limits on how much money people can donate to a campaign. To limit the wealthy candidates from having an unfair advantage, this legislation also set guidelines on how much money candidates can spend. The amendments also created the Federal Election Commission (FEC), an independent regulatory agency that discloses campaign information, enforces campaign finance laws, and oversees the public funding of presidential elections [source: FEC].

The Supreme Court addressed the legislation in Buckley v. Valeo. In it, the court grappled with the challenge that limiting campaign finances also restricts free speech. The judges held that, because campaign finance reform was an important safeguard against corruption, it's within the constitutional boundaries to restrict how much money someone can donate to a campaign. It also decided that, because wealthy candidates cannot possibly bribe themselves, restricting how much a candidate can spend doesn't prevent corruption and is an unconstitutional restriction of free speech [source: Oyez].

So that brings us up to 2002, when Congress passed BCRA. As we mentioned earlier, the act increased limits on campaign contributions. It also banned political advertisements before an election to level the playing field for candidates who face a wealthy opponent.

Congress faced the scrutiny of the Supreme Court after it passed the BCRA. In McConnell v. FEC, the court upheld much of BCRA. It ruled that the need to control corruption overshadowed any minor threat to free speech [source: Oyez]. But it also admitted that "money, like water, will always find an outlet," referring to how money is intertwined with politics, and that corruption will still bubble up [source: CNN]. So, the McConnell case was a big win for advocates of campaign reform.

Later, the court found parts of BCRA unconstitutional in FEC v. Wisconsin Right to Life (WRTL). The case concerned how BCRA banned corporations from running particular campaign-related ads for the 60 days preceding an election. When the FEC went after WRTL for violating this law, WRTL sued, claiming free speech. Although the Court ultimately agreed with WRTL, it's still a complicated matter that concerns what kinds of ads should be considered free speech.

The court later definitively struck down the BCRA's millionaires' amendment in Davis v. FEC. To level the playing field in lopsided elections, the amendment allowed financial advantages to candidates who faced independently wealthy competitors. However, the court decided that any possible corruption this could prevent doesn't justify the burden on free speech.

The question about what kinds of campaign money should be protected free speech remains controversial. As it will doubtless face more debate, time will tell what the ever-changing Supreme Court will decide.