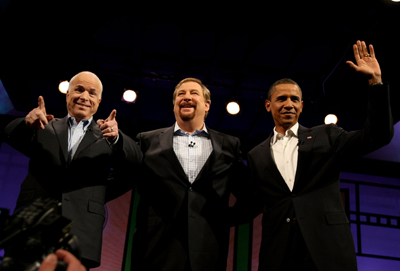 U.S. presidential candidates McCain and Obama are pictured at a town hall meeting. Along the campaign trail, they ask their supporters for money.
Justin Sullivan/Getty Images

Americans have always cherished the idea that free speech is essential for a healthy, democratic society. Freedom of speech is a stickier issue in practice than in theory. There are innumerable ways to obstruct it, and even well-meaning laws can step over the line. According to campaign finance reform opponents, meddling with how people can financially support candidates, and how much money candidates can receive, limits the speech of both supporters and candidates.

Because voters won't elect a politician they've never heard of, politicians need to advertise. Given this, candidates rely on money to buy communication. Some people argue that limiting money means limiting free speech.

However, some proponents of reform say that the bigger issue is restoring equality to a system that unfairly favors the wealthy. Unless there are regulations, the candidate with more money can afford the bigger megaphone to reach more voters. Supposedly, this gives an unfair advantage to candidates who have more money. One theory says that reform will limit both candidates to the same size megaphone or make it harder to acquire a large megaphone. With this reasoning, the debate over finance reform comes down to equality versus liberty [source: Luckowski].

Although its advocates tout that campaign finance reform levels the playing field, opponents contend that it actually does the reverse -- it gives inherent advantages to certain groups. For instance, some people say that reform favors incumbents because it intensifies a challenger's uphill battle [source: Coleman]. Delegates already in office enjoy free perks, like name recognition, media attention and other resources to help them campaign. Meanwhile, challengers must depend on spending more on advertising than incumbents who enjoy an inherent advantage. Based on this logic, equally limiting the finances of incumbents and challengers actually gives a leg-up to incumbents.

Opponents of campaign finance reform also say that restrictions favor the media [source: Paul]. Reform limits how much candidates and their supporters spend and advertise, but media outlets enjoy unfettered and unlimited rights to publish material about candidates. People who perceive political bias in the media may also be especially concerned. For better or worse, the media influences public opinion, especially during a campaign.

Nevertheless, according to proponents, reform must do more good than harm. There are limits on free speech -- you can't yell "fire" in a crowded movie theater if there's no fire. So, doesn't a campaign's susceptibility to corruption override the right to free speech? The Supreme Court has struggled with this question a few times.

On the information superhighway, people still have vast resources to find or post information about candidates should they choose to. Although buying ads on the Internet falls under campaign spending laws, the FEC struggled with how to police other campaign activity online. They ultimately ruled to largely leave websites, e-mails and blogs alone, letting them fall under the same exemption that press outlets have [source: Nagourney.] So, although this could change, the Internet remains somewhat unregulated for people to exercise political free speech.