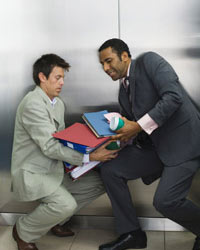 Forcing people to bump into each other can turn a business gathering into a car wreck.
Will Woods/Digital Vision Collection/Getty Images

Conferences are a great opportunity for networking. But this icebreaker will dash your hopes of a good first impression. If you fear looking silly in front of hundreds of unfamiliar colleagues, then this game might resemble your worst nightmare -- right next to the one where you show up to work naked.

This game, called "bumper collision," is meant for situations where large groups of unfamiliar people meet. When the leader starts playing music, the whole crowd is instructed to "drive" around in imaginary bumper cars throughout the room. When the leader blows the whistle, everyone must stop and "collide" into someone else. After the crash, the two drivers "exchange information" and introduce themselves until the whistle blows again and driving resumes.

As if driving around in a make-believe bumper car doesn't make you feel idiot enough, purposefully colliding into a business colleague doesn't exactly say, "I'm an intelligent professional." And, as many people in the room are sure to refrain from playing along, participants will have to choose between looking like a stuffy stick-in-the-mud or a childish goofball.

As bad as this icebreaker is, the next one overshadows them all.