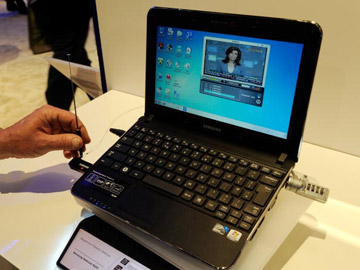 If you want to access the Internet on a lighter, more portable device than a laptop, you might want to consider getting yourself a netbook.
Ethan Miller/Getty Images

If you want to convert from an office-bound worker to a mobile business machine, the easiest transition is with a laptop computer. They're familiar, they can double as an office computer and a (relatively) portable device and you don't have to sync data as much, because much of it is right on your hard drive. Laptops come with WiFi connectivity and can access 3G cellular networks with special built-in 3G modems or plug-in receivers.

For a lighter, more briefcase-friendly device, you might consider a netbook computer. Netbooks are small, inexpensive, lightweight laptops with Internet connectivity and enough power to run the most common office software.

To really make the leap into mobile business communications, however, you may want to consider a smartphone for its versatility and portability. It can serve as your computer, your secretary and your office network, all in your pocket. There are hundreds of business-minded smartphones on the market, but most run on five core operating system technologies: Blackberry, Windows Mobile, Symbian, iPhone and Android.

Blackberry is the industry leader for business smartphones. It's preferred by power users and corporate IT departments for its security, reliability, call quality and messaging capabilities [source: Hiner]. Blackberrys run on their own server, which makes it easy for IT departments to administer armies of Blackberrys across large corporations. Blackberrys come in many flavors, some geared for global business travelers, others for a richer multimedia experience (video, photos and presentations).

Windows Mobile (recently renamed Windows phone) is Microsoft's smartphone technology. Windows Mobile runs on a wide variety of phones and styles. An advantage of Windows Mobile is that it allows users to run native versions of popular Microsoft Office software like Word, Excel and PowerPoint. It also seamlessly integrates with Microsoft Exchange Server.

Symbian is Nokia's operating system (OS) and is the most widely used mobile operating system on the planet [source: Bradley]. It has a reputation for being less feature-rich and user-friendly than upstarts like iPhone and Android, but some of the top-rated business smartphones run Symbian, including the Nokia E72 [source: Cha].

The iPhone is wildly popular with consumers, but less so with IT departments. That might be changing, though. The latest release of the iPhone 3G supports Microsoft Exchange and includes stricter security protocols like VPN support and remote wiping. And with its ever-expanding developer base, the next killer business app might be right around the corner [source: King].

Android, Google's entry into the smartphone arena, only runs on a handful of devices, but is gaining a following. Like the early iPhones, Android is trouble for IT departments because it doesn't sync easily with Exchange or Blackberry servers [source: Coursey]. But with robust productivity apps backed by the Google brain trust, it's a good choice for smaller businesses [source: Bradley].

Even the fanciest smartphone is useless without a fast, reliable mobile network. In the next section, we'll compare the major U.S. 3G carriers.