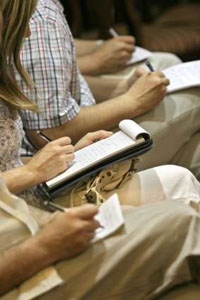 Press conferences bring reporters together for a story.
© iStockPhoto/Millanovic

Have you ever turned on the news and seen a person speaking to members of the press about a new product, a new player just signed to your home team or the president announcing a new policy? Maybe you saw Michael Vick apologize to fans and dog lovers after he pleaded guilty to the dogfighting charges brought against him. If so, then you've seen a press conference in action. A press conference is a staged public relations event in which an organization or individual presents information to members of the mass media.

Along with the press release, public relations professionals use press conferences to draw media attention to a potential story. Press conferences are typically used for political campaigns, emergencies and promotional purposes, such as the launch of a new product.

Promotional press conferences offer several advantages, such as the ability to reach all media outlets at the same time while controlling the message. A press conference also can build excitement or anticipation about an event.

Press conferences can waste time and money if the story isn't newsworthy or the press conference is poorly organized and executed. In this HowStuffWorks article, we're going to explain the ins and outs of planning a press conference, walk you through the key steps, and then explore the emerging trend of Web conferences.

Read on for step-by-step instructions on how to plan a press conference.