Advantages and Limitations of Focus Groups 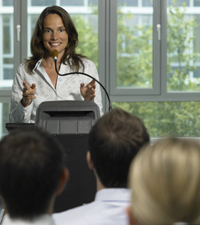 Focus groups are rarely used in isolation. Marketing researchers employ a variety of tools, including one-on-one interviews, written surveys and polling to track consumer opinion. Used with all of the above, a focus group is an integral part of gauging public perceptions. However, they do have some obvious benefits:

While all of these are valid points and give more information than a survey or questionnaire, they don't always give as much as is needed to succeed. For example, focus groups in the early 1990s said they liked Crystal Pepsi, a clear drink that tasted like cola. Nevertheless, when the product was introduced across the United States, the public didn't buy it, and Pepsi pulled it from the shelves.

Some of the reasons the company failed in producing a popular product could include some of these disadvantages:

In the next section, we'll look at specific examples of what organizations have learned from focus groups.

Quantitative research focuses on numbers and statistics. Market researchers survey consumers about a certain product and create a data analysis based on a number of responses.

Qualitative research investigates the reasons behind a decision. For instance, why and how someone chose to buy a certain car or wear a certain item of clothing.