The success of any business, utility or organization rests firmly on its reputation. That's why businesses, nonprofit organizations, governments, universities and individuals hire public relations professionals to portray them as beneficial, trustworthy and concerned members of the community.

But, all that careful image crafting can be destroyed by one poorly handled crisis. A "crisis," in public relations terms, is any event that draws intense, negative media coverage and interferes with normal business activity. Crises can cost organizations millions of dollars to repair or can potentially put them out of business for good.

Some examples of crises are:

In this article, we're going to examine crisis communication. Crisis communication is part of an overall crisis management plan designed by upper-level management and public relations professionals to reduce the potential damage caused by a crisis. Specifically, crisis communication refers to the flow of information during a crisis among an organization, its employees, the media, the government, law enforcement and the general public [source: American Library Association].

Like a disaster recovery plan, a crisis communication plan is a type of insurance policy for the long-term health of an organization. Failure to address and contain a crisis can have lasting consequences for an organization. Crisis-plagued companies like Enron Corp., WorldCom, Tyco International and ImClone Systems were still making negative headlines in 2006, even though the first reports of corporate misconduct surfaced in 2001[source: Institute for Crisis Management].

In the corporate world, white-collar crime accounted for the largest percentage of business crises in 2006, closely followed by mismanagement. The top three most crisis-prone industries were airlines, software makers and pharmaceutical companies (see sidebar for rest of the top ten).

With the exception of computer manufacturers, all these industries were also in the Top 10 the year before. 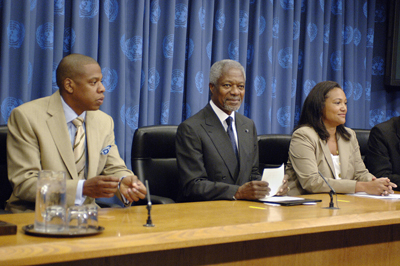 A crisis can include a press conference such as this United Nations conference responding to the global water crisis.
© Stan Honda/AFP/Getty Images

Crises have the potential to ignite a media frenzy -- or worse, widespread panic in the general public. The middle of a crisis is no time to start assembling a crisis management team or to begin reaching out to the media [source: About.com]. By mapping out a clear, workable crisis communication plan early (and revising it often), an organization can emerge from a potential disaster with its image intact or perhaps even enhanced [source: U.S. Department of State].

First, let's list the chief components of a good crisis communication plan, and then we'll go over each one in detail. These components are:

The first job of the crisis communication team is to select an official spokesperson. The spokesperson will be the primary contact for all media inquiries. They will run all press conferences and give most interviews during a crisis. They should be very experienced in working with both print and broadcast media.

The spokesperson must be extremely knowledgeable about the organization and be comfortable in front of a TV camera, with the ability to project calm and inspire confidence. They also should know how to condense complicated arguments into key talking points and how to stress those points in an interview without appearing to avoid tough questions. 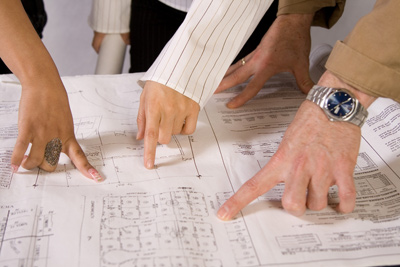 Creating a plan before a crisis happens will help to avoid chaos and more danger.
© Photographer: Assignments | Agency: Dreamstime

To make his job easier, the internal communications manager might consider implementing an emergency notification system to reach thousands of constituents instantly. Many subscription services allow an individual to send an emergency message to all communications platforms simultaneously (phone, e-mail, IM and fax).

Through these services, a notification can be initiated over the Web, via e-mail or even over the phone. One major advantage of subscription emergency notification systems is that employees and constituents can update their own contact information directly into the system and set preferences for the best way to be reached in an emergency.

A member of the crisis communications team needs to establish and maintain relationships with the local media before a crisis occurs. Media relations are one of the chief responsibilities of public relations, so this job probably would go to the team member with the most public relations experience.

What's important is cultivating a relationship of openness and trust between the organization and the reporters who cover it. This is done by pitching stories, ideas and expert commentary to reporters in good times, not just times of crisis. The media relations specialist should keep an updated list of all local and national reporters who cover the industry, their contact information and their deadlines.

In the general practice of crisis management, it's recommended that a company or organization undergo an honest self-assessment to predict where potential crises may arise. Sometimes an outside public relations firm may need to be hired to examine fully the organization for lapses in ethical or legal judgment.

Fact Sheets and Other Documents

As part of the crisis communications plan, someone needs to maintain up-to-date fact sheets about the organization and its programs. If a crisis occurs, this information can be distributed to reporters at press conferences or during interviews.

A crisis communication plan is only good if it's vigilantly maintained, updated and rehearsed. Old contact information is useless during a crisis, as are stale relationships with the media. Members of the crisis communication team need to meet regularly to double-check contingencies and make sure all team members are well trained in their roles.

Now let's talk about how crisis communication works during an actual crisis.

During a Communications Crisis 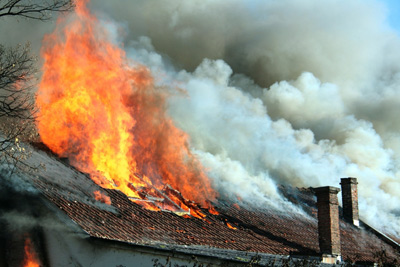 When a crisis erupts, put your plan into action.
© Photographer: Oriontrail | Agency: Dreamstime.com

At the first sign of a developing crisis, the crisis communication plan needs to be put into action. The first step should be to ensure the safety and security of all employees and constituents. The internal communications manager should activate the emergency notification system to send information to employees and constituents about the crisis, what's being done to resolve it and what they should do in the interim.

Depending on the nature of the crisis, the proper emergency authorities may need to be notified as well -- police, fire and local emergency management officials.

Internal crisis communication is crucial for safety and for information management. If employees get their information from watching and reading news reports -- especially negative news reports -- their morale could suffer. Employees must be made to feel like "insiders," or they will act like "outsiders." If employees don't feel like trusted members of the team, they could become sources of unwanted leaks to the press [source: U.S. Department of State].

To even keep well meaning employees from offering too much or inaccurate information to the press, it's recommended that the crisis communication team issue internal statements that employees could read if contacted by the press. The statement could refer reporters to an upcoming press conference or suggest they contact the official spokesperson instead.

When to Go Public?

The mantra of crisis communications is "Tell it all and tell it fast" [source: Communications for Management]. It's better for negative information to come directly from the organization in the form of an honest apology than from its critics in the form of a damaging indictment.

However, a fine line exists between responding quickly and acting hastily [source: Continuity Central]. Going public about a crisis is irresponsible if you don't have sufficient information, and more importantly, satisfying answers about what you're doing to resolve the situation.

A smart first move is to send out a press release covering the basic who, what, when and where of the crisis. The organization should also display concern for any victims involved or damages incurred. The idea is to always be the one supplying the most information the fastest.

There are lessons that can be learned from Virginia Tech's online crisis communication experience: 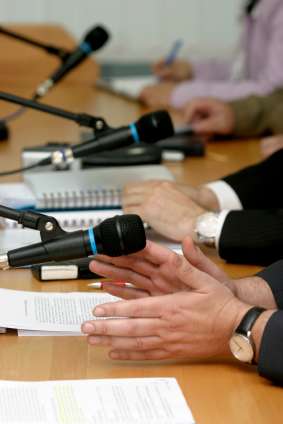 The next step is to hold a press conference. Once again, this is an opportunity to control the message. The media's job is to report the latest information available. If reporters don't get that information directly from the organization in crisis, they'll look elsewhere and be more likely to report inaccurate facts and even rumors [source: U.S. Department of State]. This is a good time to hand out fact sheets about the organization and any previous press releases about the crisis.

When preparing to make statements, it's recommended that the spokesperson put himself in the victim's position and respond in a way that is sensitive to their needs.

Beyond that, all statements should focus on two or three simple messages that can be easily remembered by everybody in the room.

It's never a good idea to comment on anything beyond the scope of the question or to speculate about a situation where all the facts aren't yet clear. It's always best to say, "I don't know," or "We're still looking into that," rather than to improvise theories on the spot.

Most of all, never lie. Honesty and candor are the best way to preserve the image and reputation of the organization. The truth will come out eventually, and at that point, the ramifications will be far worse.

Blogging During a Crisis

If the organization already has a blog, it can be an effective tool for communicating during a crisis. Blogs have several advantages over traditional media or press releases:

Even if an organization doesn't already have a blog, some experts recommend the creation of a "stealth blog" that can be launched quickly if a crisis arises [source: Corporateblogging.info]. As part of the crisis communication planning stage, team members can use the list of weaknesses and vulnerabilities to build "lockbox blogs" with messages tailored to address all potential crises [source: Micro Persuasion].

As part of the pre-crisis media strategy, it's smart to establish relationships with prominent industry and local bloggers, not just print and broadcast journalists. These "blogging allies" could be a powerful source of grassroots, word-of-mouth press to combat negative reports in the mainstream media [source: Micro Persuasion].

Now let's look at the role of crisis communication after the initial crisis is over.

After a Communications Crisis 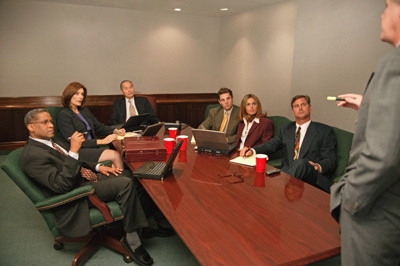 After a crisis, the team should evaluate the crisis communication plan's effectiveness.
© George Shelley Productions/Getty Images

Directly after a crisis, the organization at fault must compensate the victims. Experts recommend that the organization act quickly to provide restitution. If the victims receive compensation immediately, the crisis is less likely to linger in the press. The cost of quickly resolving the issue also will be far less than if the organization waits for litigation [source: Seven Dimensions of Crisis Communication Management].

The organization needs to make a bold commitment to ensure the errors that caused the crisis will never happen again. Precautionary measures should go well beyond the expectations of the public. In the Tylenol tampering scare of the mid-1980s, for example, Tylenol took its capsules off the market entirely until the company could design a tamper-proof bottle [source: Effective Crisis Management]. That cost the company hundreds of millions of dollars, but it regained public trust.

After the crisis has died down, the organization should establish an assessment group to determine which parts of the crisis communication plan worked and which need to be revised. A separate assessment group should examine the root causes of the disaster and decide what steps need to be taken to prevent future occurrences.

As a final act of crisis communications, experts recommend that an organization go public with its self-assessment. This gives the community further proof that the organization takes the crisis very seriously and has safeguards in place to avoid even the threat of such a crisis happening again.

For more information about crisis communication plans and related topics, check out the links on the next page.