Browse the article What's the Bureau of Consumer Financial Protection? 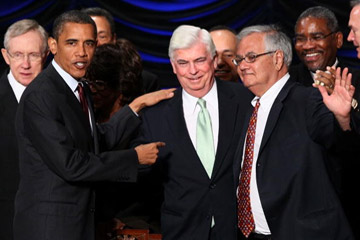 On July 15, 2010, the U.S. Senate voted 60-39 to approve the Dodd-Frank Wall Street Reform and Consumer Protection Act of 2010. The bill -- representing the most sweeping financial restrictions since the Great Depression -- gives Congress the right to break up corrupt banks and other financial institutions, eliminates proprietary trading, and ends the practice of bailing out banks in trouble.

In other words, it increases oversight of the financial industry in an effort to prevent the kinds of practices that many believe have led to -- or worsened -- the financial crisis. But what about the average Joe (or Jane) with 2.5 kids, a car and a mortgage? After all, regular people have also felt the effects of everything from corrupt lending practices to policies that work in businesses' favor while putting customers at risk. Just think of the hundreds you've paid in hidden credit card fees over the years, or those who have been dropped by their insurance companies after getting sick. The idea of massive bank bailouts and financial firms earning record profits hasn't sat well with consumers feeling the pinch of the recession, either. Many hoped the Wall Street reform bill would protect people, not just regulate businesses.

While it won't apply to certain industries -- automotive in particular -- the new law does create a new office, to be called the Bureau of Consumer Financial Protection. It's not an entirely new bureau, since it will pick up consumer protection responsibilities from several entities that already exist, such as the Federal Trade Commission. Once the transition is complete, the office will be able to regulate a wide variety of consumer financial services, from online banking to high-interest payday loans.

The Bureau of Consumer Financial Protection

The Bureau of Consumer Financial Protection will operate under the auspices of the Federal Reserve and should be up and running by the end of 2011. It will ultimately set rules and regulations for any business that provide financial services to consumers, controlling a host of financial products that include:

Right away, consumers should notice one thing: Their contracts will become easier to understand. The new law requires banks and other financial entities to do away with the kind of hidden fees and disclosures that they used to bury within the fine print. Congress' goal was to make consumers more aware of the impact of any purchases or financial decisions they make, which would ultimately make them more informed and spur competition.

Eventually, this transparency may lead to the elimination of financial frustrations like penalty fees and surprise charges. In theory, consumer awareness of these nickel-and-diming practices -- and the ability to look for a better deal as a result -- could drive prices down. In addition, consumers will have more information to allow them to compare products, select the ones that meet their needs and refuse the ones that don't [source: Mantell].

People will still have to take responsibility for their own actions and financial decisions, of course, but these offices -- and the Bureau at large -- will help to educate consumers on the consequences of those actions.

For more information on financial matters, please see the links on the next page.