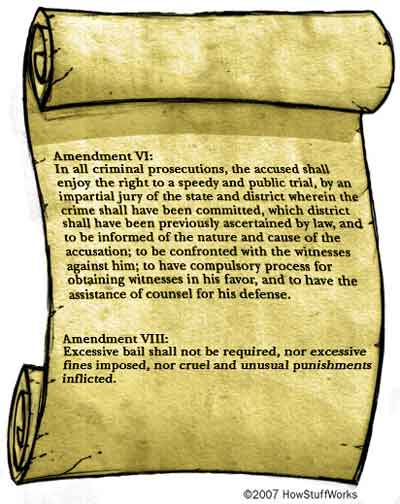 The Sixth and Eighth Amendments of the Constitution provide essential rights for a speedy trial, good counsel and reasonable bail.

The United States’ bail system has evolved from a system developed in England during the Middle Ages. In 1677, the English parliament passed the Habeas Corpus Act, which, among its provisions, established that magistrates would set terms for bail. The English Bill of Rights of 1689 declared restrictions against “excessive bail” and later inspired the Virginia state constitution and the Eighth Amendment to the United States Constitution. The Sixth Amendment to the Constitution states that all people under arrest must “be informed of the nature and cause of the accusation” they face and also allows a person to demand bail if he or she is accused of a bailable offense.

Still, American bail law is actually rooted in legislation. The Judiciary Act of 1789 stated that all noncapital offenses (crimes that did not carry the possibility of the death penalty) were bailable. In the case of capital crimes, the possibility of bail was at the judge’s discretion. The act also placed limits on judges’ powers in setting bail -- think back to the English Bill of Rights’ prohibition against “excessive bail.”

Bail law in the United States remained relatively unchanged from 1789 until 1966. In 1966, the U.S. Congress passed the Bail Reform Act, which was designed to allow for the release of defendants with as small a financial burden as possible. Before signing the act, President Lyndon B. Johnson gave a speech that contained stunning examples of how the bail system had hurt people in the past. Here’s one particularly disturbing example: “A man spent two months in jail before being acquitted. In that period, he lost his job, he lost his car, he lost his family -- it was split up. He did not find another job, following that, for four months” [ref]. Other anecdotes related similar stories: poor people spending months in jail only to later have the charges dropped; others forced to sit in jail, unable to work, only to be found innocent of all charges. In short, the bail system was biased against the poor and filling jails with people who should be out on bail.

The next major revision to U.S. bail law came with the Bail Reform Act of 1984, which replaced its 1966 predecessor. While the previous Reform Act had helped to overturn discrimination against the poor, it had left open a serious loophole that allowed many dangerous suspects to receive bail as long as they didn’t appear to be flight risks. This new law stated that defendants should be held until trial if they’re judged dangerous to the community. The law also established new categories of who could be held without bail -- mostly those charged with very serious crimes, repeat offenders, the potentially dangerous and anyone who might be a flight risk. And finally, the act stated that those who were eligible for bail had to have a bail hearing.

For more information on bail and related topics, check out the links below.