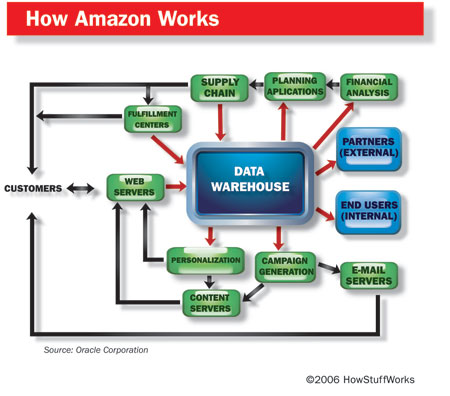 The massive technology core that keeps Amazon running is entirely Linux-based. As of 2005, Amazon has the world's three largest Linux databases, with a total capacity of 7.8 terabytes (TB), 18.5 TB and 24.7 TB respectively [ref]. The central Amazon data warehouse is made up of 28 Hewlett Packard servers, with four CPUs per node, running Oracle 9i database software.

The data warehouse is roughly divided into three functions: query, historical data and ETL (extract, transform, and load -- a primary database function that pulls data from one source and integrates it into another). The query servers (24.7 TB capacity) contain 15 TB of raw data in 2005; the click history servers (18.5 TB capacity) hold 14 TB of raw data; and the ETL cluster (7.8 TB capacity) contains 5 TB of raw data. Amazon's technology architecture handles millions of back-end operations every day as well as queries from more than half a million third-party sellers. According to a report released by Oracle after it helped migrate Amazon's data warehouse to Linux in 2003 and 2004, the central task process looks something like this:

­ In the 2003 holiday season, Amazon processed a top-end 1 million shipments and 20 million inventory updates in one day. Amazon's sales volume means that hundreds of thousands of people send their credit card numbers to Amazon's servers every day, and security is a major concern. In addition to automatically encrypting credit card numbers during the checkout process, Amazon lets users choose to encrypt every piece of information they enter, like their name, address and gender.

­ Amazon employs the Netscape Secure Commerce Server using the SSL (secure socket layer) protocol (see How Encryption Works to learn about SSL). It stores all credit card numbers in a separate database that's not Internet-accessible, cutting off that possible entry point for hackers. Customers who are particularly cautious can choose to enter only a partial credit card number over the Internet and then provide the rest by phone once the online order is submitted. Aside from the usual security concerns regarding online credit-card purchases, Amazon suffers from the same phishing problem that has plagued eBay and PayPal, so watch out for fake e-mails asking for your Amazon.com account information. Check out Anti-Phishing Working Group: Amazon.com for details on how to recognize a fake.

Now let's get back to the business of selling stuff. Amazon's approach to e-commerce is one that leaves no stone unturned.

Amazon has tried to patent nearly every aspect of its e-commerce architecture, drawing more than a little controversy for the affiliate program patent it won back in 2000. Reportedly, other e-commerce sites were already using affiliate programs that looked a lot like the one Amazon developed and patented. Here are just a few of Amazon's dozens of patents: