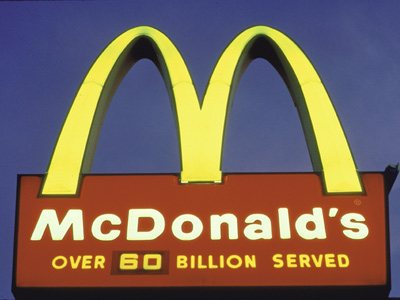 How many times have you been in your car with your radio on, gotten out, and hours later, had some jingle playing in your head? This, my friends, is good advertising. That jingle was so catchy that hours after you had been exposed to it, it still lingered. The same can be said of ad slogans. Every day, we are surrounded by car ads, credit card ads, travel ads, food ads, clothing ads... the list goes on. In this edition of How Stuff Works, adman and author Timothy Foster shows you How Ad Slogans Work so that you can better understand the various techniques companies use to make their products and services memorable to you.

Ac­cording to Encyclopedia Britannica Online, advertising is "the techniques and practices used to bring products, services, opinions, or causes to public notice for the purpose of persuading the public to respond in a certain way toward what is advertised."

In the ancient and medieval world, advertising as it existed was conducted by word of mouth. The first step toward modern advertising came with the development of printing in the 15th and 16th centuries. In the 17th century, weekly newspapers in London began to carry advertisements, and by the 18th century such advertising was flourishing.

The great expansion of business in the 19th century was accompanied by the growth of an advertising industry. It was that century, primarily in the U.S., that saw the establishment of advertising agencies. The first agencies were, in essence, brokers for space in newspapers. But by the early 20th century, agencies became involved in producing the advertising message itself, including copy and artwork, and by the 1920s agencies had come into being that could plan and execute complete advertising campaigns, from initial research to copy preparation to placement in various media.

The purpose of the strapline or slogan in an advertisement is to leave the key brand message in the mind of the target (that's you). It is the sign-off that accompanies the logo. Its goal is to stick: "If you get nothing else from this ad, get this..!" A few well-known examples of these slogans include:

Unfortunately, ad slogans don't always work, usually because they are generic, ready-to-wear, off-the-shelf lines that are taken out and shined up, ready to be used again and again when the creative juices have stopped flowing. Dozens of advertisers use them without blinking. Their ad agencies should be ashamed of themselves!

Slogans Around the World

Slogan nomenclature varies from place to place. So, what's what, where? In many parts of the world, and generically, they are "slogans." In the USA, they are tags, tag lines, or taglines. In the UK, they are end lines, endlines, or straplines. Germany prefers claims while France uses signatures. In the Netherlands, they are pay-offs or payoffs. To the unimaginative, they are rip-offs or ripoffs. And at ADSlogans Unlimited, we call them slogos (the slogan by the logo). Slogans are often treated as trade marks (™ in most countries). The use of the ™ symbol is merely an assertion by the advertiser that they are treating the line as a trademark. It does not assure any legal right. For legal protection, the line must be registered with the appropriate government trademark office, which then confers the right to use the registered symbol (®), and then they get the full protection of the law against poaching. Service marks (SM in the US) are simply trademarks for services rather than products. Trademark laws are similar in most countries. You can check out details at the US Patent and Trademark Office or the International Trademark Association.

A brand name can be a registered trademark, such as Kodak, Xerox, McDonald's, 7Up, or Coke, but a line such as "your best bet yet!" or "better by a long shot!" can't be protected for exclusive use. To avoid problems, and when in doubt, check with an intellectual property lawyer.

A perfectly-formed tagline should fulfill several criteria. First, it should be memorable. Memorability has to do with the ability the line has to be recalled unaided. A lot of this is based on the brand heritage and how much the line has been used over the years. But if it is a new line, what makes it memorable? The big idea should be told in the advertisement. The more the tagline resonates with the big idea, the more memorable it will be.

For example, in addition to be being a clever line, "My goodness, my Guinness!" was made memorable by the illustrations of the Guinness drinker seeing his pint under some sort of threat (perched on the nose of a performing seal, for example). It invoked a wry smile and a tinge of sympathy on the part of the audience at the potential loss if the Guinness was dropped.

Guinness used to use the line "Guinness is good for you" until the authorities got after them, saying "Come on! Guinness is stout! It contains alcohol! It can't be good for you! So stop using that claim!" So, the Guinness ad agency came up with a stroke of genius. The line? "Guinness isn't good for you." A good slogan should recall the brand name, and ideally, the brand name should be included in the line. "My goodness, my Guinness!" works, as does "Coke is it!" On the other hand, "Once driven, forever smitten" does not easily invoke the word Vauxhall -- a British car made by General Motors. If it is successful, the line should pass readily into common parlance as a catchphrase, such as "Beanz meanz Heinz" or "Where's the beef?" In addition to a provocative and relevant illustration or story, alliteration (Jaguar: "Don't dream it. Drive it."), coined or made-up words (Louis Vuitton: "Epileather"), puns, and rhymes are good ways of making a line memorable. So is a jingle.

There's a well-known piece of advice in the world of marketing: 'sell the sizzle, not the steak.' It means to sell the benefits, not the features. Since the tagline is the leave-behind, or the take-away, surely the opportunity to implant a key benefit should not be missed?

Conversely, the following lines have no obvious benefits:

In addition, a good tagline should differentiate the brand: "Heineken refreshes the parts other beers cannot reach" does this brilliantly. It's a classic. When the line needed refreshing, it was extended in later executions to show seemingly impossible situations, such as a deserted expressway in the rush hour, with the line "Only Heineken can do this," and lately showing unlikely but admirable situations, such as a group of sanitation engineers trying to keep the noise down to the comment: "How refreshing! How Heineken!"

The distinction here is that the line should depict a characteristic about the brand that sets it apart from its competitors, such as these lines that deliver differentiation:

A good tagline should also recall the brand name. What's the point of running an advertisement in which the brand name is not clear? Yet millions of dollars are wasted this way. If the brand name isn't in the tagline, it had better be firmly suggested. Nike dares to run commercials that sign off only with their visual logo (the Swoosh). The word Nike is unspoken and does not appear. This use of semiotics is immensely powerful when it works, because it forces the viewer to say the brand name.

One of the best techniques for bringing in the brand name is to make the tagline rhyme with it. Here are some lines we've selected from the ADSlogans Unlimited database:

An effective tagline should impart positive feelings about the brand: All the lines mentioned previously do this, some more than others. "Once driven, forever smitten," for example, or "Coke is it!" Contrast this with Triumph's line for its TR7 sports car in 1976: "It doesn't look like you can afford it," or America's Newport cigarettes: "After all, if smoking isn't a pleasure, why bother?"

Publishers will tell you that negative book titles don't sell. It is my belief that negative advertising is hard to justify. Notice how boring all the negative electioneering is in political campaigns. The voters just want to turn off. Here is a group of lines that don't profess good tidings:

So many slogans have absolutely no competitive differentiation, such as "Simply the Best" and its variants. You could add any brand name to the line and it would make sense. And this often is proven by how many users of a line there are. Consider the following:

That's just four -- we have another 25 users of the same line in our database!

Slogans that are bland, redolent of Mom and apple-pie clearly suffer a weakness. Examples include "For those who value excellence" (Henredon Furniture), "We make it better" (Singer), or "We make it happen" (Unisys).

A good tagline should be strategic: Some companies can effectively convey their business strategy in their lines, such as "Innovation" (3M), "Better things for better living, through chemistry" (DuPont), or "Disease has no greater enemy" (Glaxo/Wellcome).

Catchy taglines also try to be trendy, often without success. There are two popular trends in slogans these days. One is the single-word line, such as Hankook Tires: "Driven," (also being used by Nissan in the US), IBM: "Think," (neatly hijacked by Apple as "Think Different,"), or United Airlines: "Rising" (which is being dropped). It is hard to deliver a complex message in a single word, so that brings us to the other trend...

Omitting words such as "the" and "and," these are the 20 most frequently used words in slogans (percentages represent the number of lines using that word out of the total number of ad lines):

Testing a Line for Effectiveness

The line may look good on paper, but there are some tests you can give the words to see if they really work:

Does the line help when you're ordering the product or service?

Some examples that do:

Some examples that don't:

Does it prompt a sarcastic or negative response?

Some examples that do:

Does it sound a bit pompous?

This is where you read the line with the utmost gravity, like an American narrator in a 50's corporate film, giving it the true spin of importance. These fail the test:

Does it reek of 'corporate-speak', sounding unreal?

Does it make you say "Oh yeah?"

Does it sound a bit mixed up?

In any event, here's to more creative, effective slogans. We'll be watching!

Timothy R V Foster is the founder of ADSlogans Unlimited in the UK. Born and educated in England, Foster attended Lancing College. His first job was as office boy at Radio Luxembourg's London office. In his early career, Foster worked for Procter & Gamble of Canada's advertising department as a television commercial producer. In the late 1960s, he joined Merrill Lynch in Toronto as a stockbroker, becoming vice president and worldwide director of advertising and sales promotion in New York in 1974. In 1984, he joined public relations giant Burson-Marsteller in New York as a creative director, and moved to London in 1986 in the same role, where he became vice president. In 1987, Foster entered into the private business sector in England. Today, he writes books and runs his advertising slogan database, a collection of slogans, etc. used by ad agencies to check prior/current use. He has also started "The Advertising Slogan Hall of Fame" and a naming/slogan-creation arm, "Aims, Names, and Claims," both of which can be accessed at the ADSlogans Unlimited Web site. Timothy Foster is the author of 22 books, plus many videos, training manuals, and television scripts. He holds an airline transport pilot license and flew his own aircraft for many years.