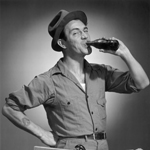 Everyone's heard of the "Pause that Refreshes" Coca-Cola campaign -- which is why it's not included in this list.
George Marks/Retrofile/Getty Images

There are a lot of innovative and creative minds toiling in the field of advertising today. Thanks to the advent of user-friendly desktop image manipulation and design programs like Photoshop and Illustrator, bending reality to an ad executive's whims is easier than ever. Because of these two factors, agencies worldwide have been churning out a treasure trove of awesome advertisements.

But not all of these ads make their way across the globe. Due to social mores, some are too racy for some Western sensibilities. Others speak more to a particular nationality or cultural group than others. And some, on the other hand, are hyper local; the campaign is too expensive to create more than a single billboard in one location.

Whatever the cause, some of the great ad campaigns around the world don't make it across all borders. As such, we present 10 of the better ad campaigns that may have slipped below the radar.