by William Harris
Prev NEXT
4 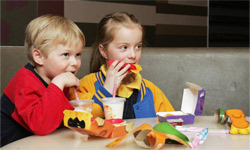 McDonald's was on a roll in the early 1970s. The Big Mac was already a huge hit when the company introduced the Quarter Pounder and Quarter Pounder with Cheese in 1973. Next came the Egg McMuffin, launched officially in 1975. Why not take that momentum and target an untapped market -- kids? And why not do it with a special package that included a meal and a toy?

The solution was the Happy Meal, which made its debut at a St. Louis restaurant in 1979. It was relatively simple back then: a circus-themed cardboard box containing a hamburger, fries and unpretentious toys, such as a McDoodler stencil, a puzzle book, a McWrist wallet, an ID bracelet and McDonaldland character erasers. Over time, the toys became a bit fancier and featured tie-ins with brands, such as Barbie and Hot Wheels, as well as major motion pictures. The food selection also expanded to include Chicken McNuggets and Apple Dippers. Maybe that's why a recent Zagat survey named McDonald's the most child-friendly fast-food chain.

Whether kids come for the food or the toys, Happy Meals are a giant success. More than 3.6 billion meals have been sold since their inception [source: Nation's Restaurant News]. That means about 20 percent of all meals sold at McDonald's are Happy Meals [source: Spurlock].