by William Harris
Prev NEXT
5 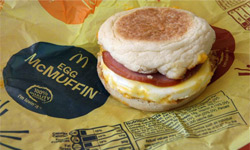 It's hard to believe in our bustling world that as late as the 1970s, fast-food restaurants opened at 11 a.m., closed at midnight and limited their menus to lunch and dinner items. That all changed in 1971, when McDonald's franchisee Herb Peterson set out to make an eggs Benedict sandwich. Peterson started with an English muffin, then layered on a slice of grilled Canadian bacon, a poached egg and a slice of cheese. The poached egg presented a production problem until Peterson devised a new implement -- a cluster of six Teflon-coated rings -- that could cook several eggs quickly. The final problem was the name, which Patty Turner, wife of McDonald's President Fred Turner, thought up one night over dinner [source: Love].

By 1976, the Egg McMuffin was selling like, well, hotcakes. And speaking of hotcakes, McDonald's added them, along with sausage and scrambled eggs, to strengthen its breakfast menu. Its restaurants also extended their hours, opening at 7 a.m. -- much earlier than most other fast-food chains -- and gaining another four hours of brisk sales. Competitors would not introduce breakfast items for almost another 10 years. By that time, McDonald's had cornered the market. To this day, breakfast accounts for 15 percent of McDonald's sales [source: McDonald's annual report].

We'll cover how kids factor into those sales next.