by William Harris
Prev NEXT
7 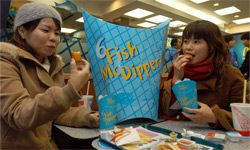 Fish McNuggets? Japanese McDonald's tried them out in 2004 amid consumer concerns about meat products and after the bird flu scare.­
AP Photo/Chiaki Tsukumo

In the late 1970s, McDonald's was known as the King of Burgers. But a key to survival, the company knew, was getting a successful chicken product on its menu. To help lead the charge, Ray Kroc hired Rene Arend in 1976, a European chef who refined his culinary magic at the Whitehall Hotel in Chicago. One of Arend's early projects was "onion nuggets" -- chunks of battered, deep-fried onions. They flopped completely, but their underlying concept inspired the company to create a similar product made out of chicken.

Years of experiments, involving McDonald's product development staff and outside suppliers produced Chicken McNuggets, which were tested in 1980 and fully introduced nationally by 1983. By 1986, the bite-sized chicken pieces accounted for 7.5 percent of McDonald's domestic sales, making McNuggets one of the most successful product launches in fast-food history [source: Love].

Today, McDonald's continues to evolve its chicken-based menu. Chicken McNuggets, now made with all white-meat chicken breast, sit next to Chicken Select Strips, which made their first appearance in 2002. By 2003, McDonald's was responsible for 79 percent of the growth in the chicken strips category within the fast-food sector. By 2004, the company had served more than 65 million pounds (29 million kilograms) of Chicken Selects to customers nationwide [source: QSR Magazine]. Not too shabby for a restaurant famous for its burgers and its -- apples?