by William Harris
Prev NEXT
9 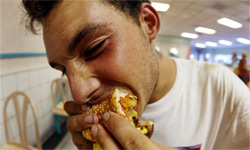 A menu item that gains popularity with customers almost always gains popularity with McDonald's investors. And no menu item has been more popular with investors than the double cheeseburger. How could something so pedestrian, especially when compared to the Big Mac, become so important to shareholders? Well, in January 2003, McDonald's reported its first quarterly loss in 38 years. A few months earlier, the company introduced its Dollar Menu, a value-priced selection of items anchored by the double cheeseburger. No one knew it then, but that simple sandwich, the one made with two burgers and two slices of cheese, would turn the company around. It became the most ordered item, and as its popularity grew, the Dollar Menu reshaped McDonald's fortunes, stimulating 36 consecutive months of sales growth at stores open at least a year [source: Warner].

Of course, the mighty always fall, and the McDonald's double cheeseburger is no exception. In January 2009, as the price of processed American cheese increased by almost a dollar a pound, the company decided it could no longer sell its popular burger for a dollar. In most stores, the double cheeseburger now costs $1.19, and in its place on the Dollar Menu resides a new product, the McDouble burger, which features two beef patties, but only one slice of cheese. Removing a single slice of American cheese will save about 6 cents per burger and boost cash flow per restaurant by an estimated $15,000 per year [source:Ross]. How the McDouble will fare with customers remains to be seen.

How about some leafy greens to go with that burger?