by Chris Warren
Prev NEXT
4 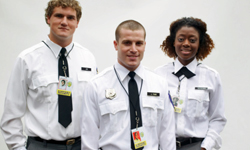 Hire professional security guards if you have people and property to protect.
Creatas/Thinkstock

The image of the rotund security guard Paul Blart, played by comedian Kevin James, earnestly patrolling a darkened shopping mall on a Segway is easy to laugh at -- and judging by the success of the movie, plenty of people did. It's a fictionalized example of one of the more routinely outsourced jobs. Indeed, retailers, universities, banks and even wealthy people frequently hire private security firms to protect persons and property, which they can do at reduced expense and liability than if they added full-time guards to the staff. More controversially, private security firms also provide protection to U.S. diplomats and foreign leaders, which led to uproar and debate in Iraq in 2007 when guards from the company Blackwater were involved in an incident in which Iraqi civilians were killed.

Next, we'll return to the call centers of India and the Philippines to see why they might not always be such a good idea.