by Chris Warren
Prev NEXT
10 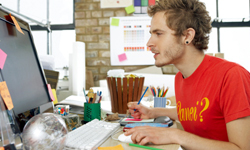 Many businesses find it economical to outsource writing to freelancers.
Ciaran Griffin/Lifesize/Thinkstock

Years ago, reporters and editors at The Los Angeles Times jokingly referred to their newspaper as "the velvet coffin" because of its reputation for giving its workers lifetime job security and high wages [source: McLellan]. Due to declining advertising revenue and increased competition from the Web, those days are long gone in Los Angeles, and at newspapers generally, where staffs have been slashed along with salaries. Today, newspapers and Web sites (including this one) rely heavily on freelancers to produce content. It's not just journalism that depends on outsourcing to produce the words that appear on pages and screens: Large corporations, universities, book publishers and movie studios all rely on freelance writers to produce everything from ghostwritten or original books, blogs, press releases, annual reports and screenplays.

While these outsourced positions provide information and entertainment, on the next page we'll meet people who make sure the trains run on time.