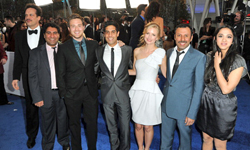 The cast from NBC's "Outsourced" at the 2011 People's Choice Awards in Los Angeles.
Jeff Kravitz/FilmMagic/Getty Images

In 2010, the American television network NBC announced it would air a comedy called "Outsourced." The show was set in a call center in India that handles customer service inquiries for an American company that makes quirky novelty items, like wallets made of bacon.

The show itself lasted only one season, but anyone who has called a customer support hotline and spoken to someone with a foreign accent will be able to relate to the scenario conjured by the show's producers. To be sure, the "Outsourced" writers were playing stereotypes for laughs, but for many, outsourcing isn't funny at all -- it's part of doing business.

Those working in call centers hold just one of many types of jobs that companies of all sizes outsource these days. And jobs don't only go to places like Mumbai or Manila. Indeed, outsourcing -- which is essentially subcontracting to an outside company or person -- is also known as offshoring when it's done internationally. That's what happened in "Outsourced," when an American company hired employees in India to do the work.

Typically, companies that outsource jobs do so to save money and become more competitive and profitable. Increasingly, however, companies are motivated by the expertise and skill they can leverage from external sources without having to hire a lot of new employees.

We've chosen 10 jobs that are frequently outsourced, listed in no particular order. Read on to see how, depending on the job, outsourcing can benefit a company -- or hold it back.