by Joseph Miller
Prev NEXT
6 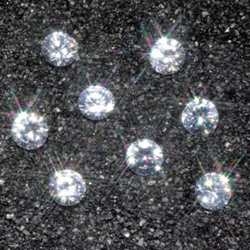 The discovery of diamonds in the sand in Namibia led to the rapid growth of Kolmanskop. But the miners eventually left in search of better finds, and the town went bust.
Jeffrey Hamilton/Digital Vision/Thinkstock

If diamonds are a girl's best friend, it's only because they were a prospector's first.

In 1908, a railway worker kicked up a diamond in the rough sands of northern Namibia. Overnight, a diamond rush was on in the West African country, colonized by Germany in 1884.

German miners built Kolmanskop as a refuge in the desert, bringing architectural styles from their homeland. A theater, hospital, school, bar, stores and other buildings made life a little easier in the harsh desert climate.

Most of the diamond harvesting came from placer mining. The deposits were allegedly so great that prospectors could go out into the desert on hands and knees to find diamonds sparkling in the moonlight. By 1914, more than 5 million carats had been discovered [source: McQuillan].

The town survived through both World Wars I and II. However, in the mid-1940s, mining operations moved farther south to Oranjemund, where larger diamond deposits were found along the Orange River. By 1950, Kolmanskop was virtually empty.

Many buildings still stand today, decayed over the years by desert winds and sand. The ghost town has become a tourist attraction, where visitors can snap photos of homes partially filled with sand. Kolmanskop even served as the site of a 2000 film, "The King is Alive," about a group of stranded tourists who reproduce Shakespeare's "King Lear" among the town's ruins.

Unlike diamonds, one mined mineral came at a great cost to our next boom town to go bust, this time in the land down under.