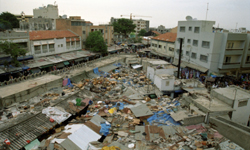 If boom towns can't sustain their success, they may find that people pack up and leave.
iStockphoto/Thinkstock

Throughout history, cities spring into existence, the essence of a people's livelihood. Most cities and towns develop over a period of many years as a society advances, but that's not always the case.

Sometimes the population of a town skyrockets overnight, typically accompanying some economic boom. These "boom towns" often spring up at the site of a precious commodity, be it gold, silver or diamonds. Boom towns are also founded around sources of energy, like oil and coal.

In this article we'll explore 10 boom towns -- listed in no particular order -- that had a glorious beginning, only to fall victim to a hastening decline, or bust.

Though the boom town phenomenon is a global one, we'll begin by looking at those that have captured the imagination of folks hoping to strike it rich during the westward expansion of the United States in the 1800s.