by Joseph Miller
Prev NEXT
7 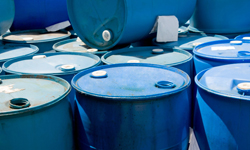 Though it once produced millions of barrels of oil, Desdemona, Texas, was soon tapped out, and the town eventually shut down.
Comstock/Thinkstock

In 1857, a small group of settlers built a fort for protection from Indians in the wild frontier of Eastland County, Texas. Within 20 years, a small town cropped up, named Desdemona for the daughter of the justice of the peace. At the time, the town made a living mostly on peanut farming. In 1904, the town had a population of 304.

That changed in 1918, when Tom Dees, director of the Hog Creek Oil Co., hit the jackpot. Tents on the newly discovered oil fields sprang up overnight, home to nearly 16,000 speculators and workers [source: Wiggins]. Within a year, stockholders in the Hog Creek Oil Co. were able to sell $100 shares for $10,250 each.

As in many boom towns, fast money brought fast times. In 1920, rampant lawlessness drew the attention and discipline of the Texas Rangers, a paramilitary group of soldiers.

The Rangers didn't stay long. Between 1919 and 1921, oil production dropped from 7.4 million barrels to 2.5 million, indicating a sharp drop in underground reserves. Desdemona's bust had arrived.

The town suffered a sharper bust than other oil boom towns of the area, like Ranger, Texas. In 1936, the city government dissolved itself. In 1969, the town's only school closed its doors.

To this point, we've looked at boom towns that went bust during America's westward expansion. But the trend isn't limited to the United States. Next we'll discover an African city swallowed by the sands of time.