by Joseph Miller
Prev NEXT
9 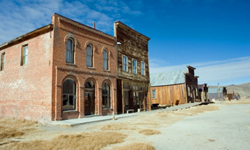 Bodie, Calif., took off after gold was discovered nearby in the 1870s. But as gold mining declined, so did the town.
Hemera/Thinkstock

Of all the Western gold rush towns of the mid- to late 1800s, Bodie, Calif. stood out from the rest, though its start was like many others.

Discovered in 1859 in the Sierra Nevada Mountains by W.S. Body and other prospectors, gold and silver in the hills drew enough people to form a town named after Body (respelled to avoid mispronunciation).

It wasn't until 1875, though, when the real boom began. A collapsed mine revealed a particularly rich vein of gold, and word spread quickly. Between 1877 and 1881, the town's population exploded to somewhere between 8,000 and 10,000 [source: Piatt].

The massive influx brought in more than 60 saloons and dance halls, stamp mills to extract ore, general stores and other businesses. And with all that, the town gained a reputation for being wild and lawless.

The Wild West boom didn't last long for Bodie. Mining dropped off in the late 1800s, and subsequent fires destroyed much of the town.

Today, what's left standing of the ghost town is Bodie State Historic Park, placed on the U.S. National Register of Historic Places in 1961. A handful of buildings stand in "arrested decay," preserved for today's tourists to catch a glimpse of what once was.

The next town might have boomed on silver deposits, but it became better known for lead bullets and the people who fired those shots.