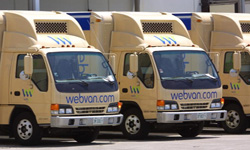 Webvan trucks sit outside an Illinois distribution center on July 10, 2001 -- the day after the popular company shut its doors for good.
Tim Boyle/Getty Images

Webvan.com was almost too good to be true. Customers in seven major U.S. cities could sit at their computers, order a large (or small) amount of groceries and have them delivered to their door in 30 minutes or less. For city folks, who were sick and tired of struggling to find parking or lugging overstuffed grocery bags on overstuffed buses, Webvan was a godsend.

Unfortunately, it was also a financial pipe dream.

Launched in 1997, Webvan went public in 1999 and raised $375 million in the process. Yet even with this cash -- plus an incredible $1 billion from private investment firms like Sequoia Capital -- the company couldn't become profitable [source: Himelstein].

Analysts blame several factors for Webvan's demise, not the least of which was the great expense of building its gee-whiz automated warehouse infrastructure. Each 300,000-square-foot distribution center cost $25 million to build and employed 16 people (and a thousand servers) just to handle the back-end technology [source: Himelstein]. It ended up costing the company $27 per order just for processing and delivery. And with an average order amount of around $80, that meant continual losses [source: Mullins].

In a last ditch effort to save money, Webvan.com drastically cut the variety of products it offered on the site, which alienated loyal customers and brought sales to a screeching halt -- just in time to declare bankruptcy in 2001, a mere 18 months after its triumphant IPO.