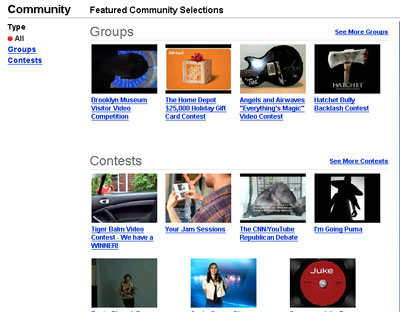 There are many ways YouTube members can interact with one another. You can send private messages or make a comment for everyone to see through a user's personal channel. You can also comment on individual videos unless the video's creator has turned off that feature.

Some YouTubers prefer to turn off the comment feature in an effort to avoid trolls -- members who leave insulting comments. Another annoying comment byproduct is spam. Some YouTube accounts seem to exist only so that the user can leave comments advertising a particular Web site or YouTube video in as many comment sections as possible. Fortunately, YouTube has provided users with an option to block specific accounts from commenting on videos.

Some YouTubers want to keep every comment, even negative ones. That's because each comment on a video contributes to the clip becoming one of YouTube's "most discussed" videos. When a video lands on the most discussed list, it's featured on YouTube's videos section, which can result in a dramatic increase in viewers. On YouTube, it really is true that there's no such thing as bad publicity.

YouTubers can even leave video responses to another video. The member wishing to comment films himself or herself and uploads it to YouTube as a comment. It's possible for two or more members to engage in a video conversation or debate by uploading video replies to one another. YouTube has a Quick Capture tool that allows members to record a video using a Webcam and upload it to the site using a single application, which works great for video responses.

Another way users can interact is to rate one another's videos. Under each video is a rating mechanism that ranges from one to five stars. YouTube members can rate videos (non-members can only watch and enjoy). YouTube automatically tallies user ratings and features the highest rated videos on the videos page.

Many YouTubers use their accounts to express admiration or condemnation for other YouTubers. Behind every prominent YouTuber is a small army of supporters and detractors. There are many passionate and sometimes fiery videos on YouTube focused on other members.

Not all community interaction is between YouTube members -- YouTube also has an official blog where members can read up on new developments on the site. YouTube staff members write the blog entries and use the space to announce new events, contests and interesting YouTube applications.

In the next section, we'll look at the rules and regulations that YouTube community members are expected to follow.

A vlog is a video web log, sometimes called a video blog. can be about any subject but usually feature a YouTuber's personal perspective on issues.