by Carrie Whitney, Ph.D. Jan 24, 2019
Determining how stations price gasoline is complicated, and that means from state to state and even corner to corner, prices vary a lot. Joe Raedle/Getty Images

It's a familiar scenario. You pull into a gas station and fill up, only to drive a block down the road and see another station has gas for 20 cents less than you just paid. After a bit of quick math, you realize how two dimes per gallon really adds up. For a vehicle with a 15-gallon (56-liter) tank, 20 cents per gallon could mean up to $3 per fill-up — or about $156 a year if you get gas weekly.

In 2017, Americans consumed about 142.98 billion gallons (54.1 trillion liters) of "finished motor gasoline," according to the U.S. Energy Information Administration (EIA). At the current U.S. average price per gallon — $2.266 — at-pump sales reach nearly $323 billion. So what exactly goes into setting the consumer price, which has gone as high as $4 per gallon in past years? Is it greedy station owners? Top-down price gouging from oil companies? The government?

The easy answer is many things go into setting gas prices, starting with the price of crude oil, which has the most significant effect on pump figures. But it's not that simple. The "black gold" market doesn't account for price differences from station to station in the same city on the same street. That's because layered on top of the crude oil prices are other expenses like refining, transportation, taxes and marketing. Along most steps between rig and pump, profit gets added to the equation. All that is to say determining gasoline prices is complicated, and the result is that from state to state and even corner to corner, the price varies — greatly.

"What really moves up or down gasoline prices is crude oil," explains T. Mason Hamilton, senior petroleum markets analyst with the EIA, the non-political, statistical and analytical branch of the U.S. Department of Energy. He describes gasoline as a cocktail, like a martini, and crude oil as the main ingredient, like vodka. If the price of vodka goes up, the price of martinis will follow suit. Supply and demand set crude oil prices, although the EIA states that OPEC (Organization of the Petroleum Exporting Countries) will sometimes exert "significant influence on oil prices by setting an upper production limit on its members."

Before it is of much use, crude oil must be processed into petroleum products, and this is where refineries come in. So back to our martini example: During the refining process, the vodka becomes a martini as other ingredients get mixed in — or crude oil becomes gas. Price is affected here because there are different formulas and quality standards to adhere to. A branded station — think Exxon or BP — can only buy its contracted brand of gasoline, which boasts a special recipe. An unbranded station, Sheets or Costco, buys basic, wholesale gasoline, which makes it cheaper, but leaves the station with a less guaranteed supply.

Beyond various brand formulas, there are regional requirements. For example, with the 1990 Clean Air Act, the U.S. Environmental Protection Agency rolled out the first phase of a program that requires "cities with high smog levels" to use reformulated gasoline (RFG), which is more expensive to produce. This accounts for some of the variance between metropolitan and rural prices.

Some states also have stricter air quality regulations than others. Not surprisingly, California has its own grade of gasoline with a "different set of specifications than the rest of the country," according to EIA's Hamilton. And it's inherently more expensive to produce. So is summer gasoline, which has a different vapor pressure than winter-grade gas.

Now that all explains why gas is more expensive in California than in Minnesota, and why gas is pricier during summer. But it still doesn't solve the million-dollar-question: Why do prices vary between gas stations located near each other? Part of that answer lies in transportation costs, which come into play even when stations sit side by side. Moving crude oil to a refinery, through a pipeline or across an ocean, and on a truck to supply the station adds up. Based on contractual agreements, routes from rig to pump vary considerably, making one station's gasoline more expensive than the other's.

Before the gas station owner puts those giant numbers on the marquee, taxes are added in. The federal government taxes gasoline, and so do state governments. The EIA reported 18.4 cents per gallon of federal tax and an average of 28.62 cents per gallon of state taxes as of August 2018. Some municipalities add their own taxes on top of these.

Finally, the gas station owner, an individual franchisee or a corporation, sets a price allowing for profit. This final piece incorporates the cost of doing business, as well as the aims of the gas station, such as whether it is mainly a filling or service station, or if the goal is really to make money selling taquitos.

When you consider all of these complex factors, it just becomes clear that it pays to be on the lookout for the best gas price because consistency is not one of the gas industry's buzzwords. The only remaining question, of course, is — what's with that extra nine-tenths at the end of the price?

Now That's Scary
According to the U.S. Energy Information Administration, gasoline accounted for about 22 percent of the total U.S. energy-related carbon dioxide emissions in 2017.

Get Out the Haggis, It's Burns Night! 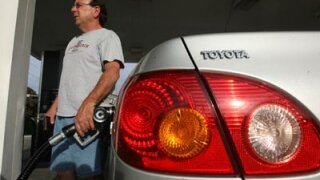 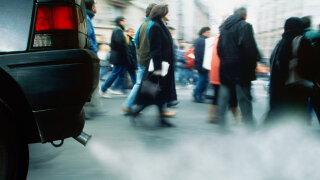 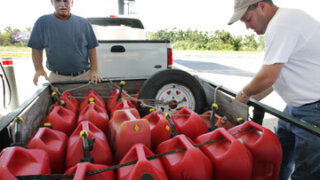 Why is it so hard to cut dependence on gasoline?