Browse the article Why Buy a Sports Jersey When You Can Rent One? 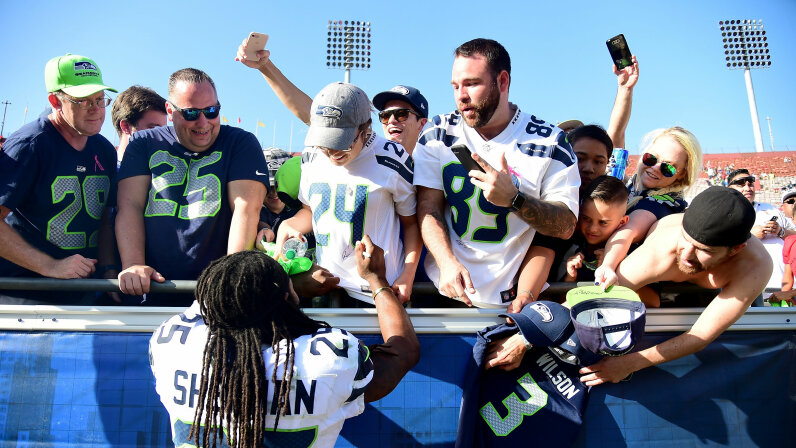 Richard Sherman (No. 25) of the Seattle Seahawks signs autographs for fans after a 16-10 win over the Los Angeles Rams at Los Angeles Memorial Coliseum on Oct. 8, 2017. Harry How/Getty Images

No one wants to shell out big bucks for a football jersey with someone's name on it that becomes obsolete when the player is traded to another team. Now, a new company says you don't have to. Rep the Squad sends you a different sports jersey whenever you like, allowing you to always show who you're rooting for on a given day.

The Seattle-based business works like Netflix did in the video business's early days. You go to the Squad's website and select a jersey you'd like to wear. The company ships it out and you keep it as long as you'd like. When you're ready for a new one, you mail the jersey back in the prepaid envelope. A few days later you'll receive a new shirt. The monthly fee for this service is $19.95.

Currently the company offers jerseys for players repping the Detroit Lions, San Francisco 49ers and Seattle Seahawks, but it plans to add other teams. The company also stocks retro jerseys and the jerseys of retired classic players.

Company founder Brian Watkins told the New York Daily News that because sports jerseys are pricey, most people can't afford to have an extensive collection of them. It's also a huge bummer when you pony up to buy your favorite player's jersey, and then he gets traded to another team.

A little queasy about the idea of wearing a jersey someone may have spilled beer and wing sauce on? No worries. After a customer mails back a jersey, the company dry cleans it and someone personally inspects it before sending it out to the next user. But if you damage a jersey, you'll be billed. If you become attached to a particular shirt, you can purchase it from the company at a discounted price.

Rep the Squad plans to also cover other sports, including professional hockey, baseball and basketball. Jerseys for some NBA teams will be available in time for the 2018 season.