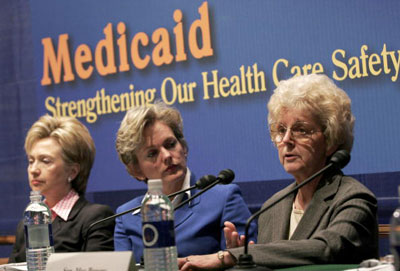 Socialism suffered major setbacks due to the collapse of communism in the Soviet Union and other Eastern European states. And many other societies followed in Great Britain's footsteps and denationalized their industries. However, some socialist-inspired programs exist today. In fact, any program that calls for the redistribution of wealth can be considered socialist. For example, the tax that the United States imposes on citizens to support the welfare system, which provides aid to financially unstable citizens, can be considered a socialist program. Healthcare systems like Medicare and Medicaid fall in the same category.

Another example of a socialist program is Canada's healthcare system. Proponents of this system argue that it provides free healthcare to those who would otherwise be uninsured or underinsured. They also point to the rising cost of health care in places like the United States, which some believe is caused by profit-driven insurance companies, for-profit hospitals and pharmaceutical companies.

But the grass isn't always greener on the other side. Canada's free healthcare system often delays important medical procedures and treatments simply because it doesn't have the manpower, space and time to handle them. One highly publicized example of this untimely delay is the case of identical quadruplets born in Montana. The quadruplets had to be delivered in Great Falls because no hospital in the entirety of Canada, where their parents reside, could handle their delivery. Every hospital was at capacity at the time. Other inconveniences include the average waiting time for a standard Magnetic Resonance Imaging (MRI): three months [source: Fraser Institute]. Critics of the system insist that while the residents may not pay much up front, they seem to pay for it in terms of delayed care and poor quality of service. The system isn't even actually free -- roughly 22 percent of Canadian tax dollars are used to fund the healthcare system [source: Lehr].

Socialist groups around the world continue to push for reform in their societies. However, they're often counteracted by critics, including the Future of Freedom Foundation, the Cato Institute and Sons of Liberty, many of whom point to what they consider to be the fatal error in socialist thought: How could any truly socialist society succeed without the incentives of profit and constraints of competition to motivate workers?

At any rate, the que­st for a purely socialist -- and for that matter, a purely capitalist -- society has eluded economists thus far. After all, the United States, considered one of the most successful capitalist economies in the world, utilizes a number of socialist-inspired programs to help its financially encumbered citizens. For the time being, at least, it seems that mixed economies, featuring both socialist and capitalist elements, are much more realistic.