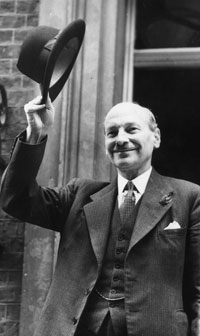 Clement Atlee on his way to the House of Commons, where he delivered his crisis speech on the situation in Abyssinia.
Douglas Miller/Keystone/Getty Images

Another example of applied socialism began just after World War II. Great Britain's storied leader during the devastating war, Prime Minister Winston Churchill, shockingly was defeated in re-election by Clement Atlee, a virtual unknown outside of Britain. Atlee was the head of the Labour Party, a democratic socialist party established in 1900, while Churchill was head of the conservative party, also known as the Tory Party. After World War II, much of Britain was fed up with healthcare concerns and labor problems, and many people didn't believe that Churchill's Tory party would effect any change. Atlee's socialist party addressed these issues by nationalizing industry and creating a free healthcare system.

The Labour Party nationalized Britain's main industries, including coal, electricity, steel and the railways. Nationalization occurs when the state takes over the means of production and distribution. The idea is that any profits generated will then benefit the country, rather than a wealthy few. Some improvements resulted from nationalization in Britain. For example, coal miners were given paid vacation and sick leave, and their safety became a greater concern. But nationalizing industry turned out to be trickier than anyone initially thought. Industries became inefficient and unprofitable because no competition existed to motivate workers to perform better on the job.

The new government also established the National Health Service (NHS) in 1948, which provided free medical care. The system was extremely popular -- to a fault. Funds allocated for the NHS were used up quickly, having been far under budgeted. But because the program was so popular among the people, it was kept in place, despite the debt it incurred. It remains even today as the only major change implemented by Atlee's Labour Party. Unfortunately, getting medical care under this free system can be a very tedious process with a long waiting time.

Although nationalization and free healthcare aimed to help its people, Great Britain began to suffer steep inflation rates -- as high as 24 percent in 1975 -- and high unemployment rates [source: PBS]. Welfare costs were also draining the economy. The period of December 1978 through January 1979 became known as the Winter of Discontent (an expression that originated from Shakespeare's play "Richard III"), thanks to the many members of the public sector who went on strike, including truck drivers, medical personnel and teachers. To the British people, the Labour Party seemed incapable of controlling the strikes that were affecting the public. Due to this strife, the Conservative Party came back into power when Margaret Thatcher was elected the first female prime minister in 1979.

Thatcher worked to improve the economy through reduced spending in areas like education and healthcare. Although inflation went down, unemployment continued to rise. Under Thatcher's leadership, Britain's government denationalized many important companies, starting with British Telecom. By selling it off to shareholders, the company's profitability and efficiency increased. Thatcher also reduced the power of trade unions to decrease the number of economically devastating strikes.

Though many of her policies may not have been popular, Thatcher managed to resolve some dicey economic situations in Great Britain. Her election was seen as a great victory for capitalism and prompted the beginning of a capitalist revolution of sorts. Countries such as Spain and France began to steer away from socialism and suddenly, the world's socialist population began to shift. While at the end of the 1970s, socialist and communist regimes were in control of 60 percent of the world's population, things were changing --fast [source: PBS].

In the next section, we'll take a look at socialism in today's world.