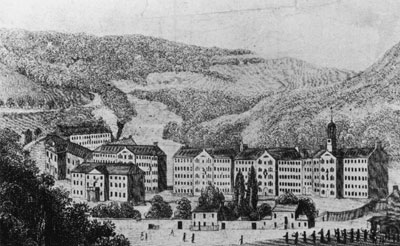 After World War II, socialist parties took control in more nations. Many countries nationalized major industries, such as coal and steel. These countries also encouraged government planning to spur economic growth. Societies that took socialism out of its theoretical context and put it to the test found flaws and successes in the system. We'll examine two of them.

One of the most famous examples of socialism in practice took place in New Lanark, Scotland. The village was founded in 1786, but it wasn't until 1800 that it became world famous as a socialist experiment of sorts.

Robert Owen was a philanthropist, successful businessman and dedicated social reformer who made his fortune during the Industrial Revolution. Known for his benevolence, Owen longed to create a village in the utopian socialist ideal. He turned the cotton mill-based town of New Lanark into a cooperative society in which everyone abided by the socialist premises of equal work, equal pay and no ownership of private property. In addition, Owens instituted progressive labor reforms: reduced work hours, safer working conditions and minimum age requirements for child labor (although he mandated age 10 as the appropriate age, which is still very young by today's standards).

Roughly 2,500 people called New Lanark home, including about 500 children whose lot in life Owen was determined to improve through education and better labor policies. In fact, in 1816, Great Britain's inaugural pre-school was opened in New Lanark. Owens' society was so successful that it generated substantial profits and attracted the world's attention -- tourists flocked to New Lanark to see what, exactly, it was like.

Owens' vision became a successful reality in New Lanark but didn't spread throughout Great Britain as he had initially hoped. In 1824, Owen decided to throw in the towel on what he considered a closed-minded environment and sailed to the United States. He purchased land in New Harmony, Indiana, where he established a commune with similar standards to New Lanark's. Owens made even more progressive strides at New Harmony by putting forth the radical idea of equal rights for women. Around the height of New Harmony's success, 15 other socialist communities sprang up. However, none stood the test of time and they all collapsed. New Harmony itself folded when one of Owens' business partners left and took the community's profits with him.

In the end, Owen lost much of his personal wealth due to his forays in utopian socialism. He returned to England in 1829, where he helped establish Britain's first trade unions. Though this visionary's villages can't be considered completely successful, they certainly paved the way for labor reform around the world.