Future of the Sharing Economy 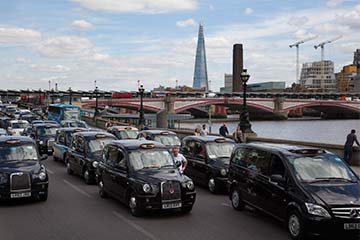 The future of the sharing economy largely depends on upstart websites striking deals with federal, state and local regulators. Airbnb and Uber, the two biggest names in the sharing economy, have come under fire for flouting laws that regulate the hotel and taxi industries. Leading the charge are the hotels and taxi drivers themselves, who complain that "sharers" don't have to buy special licenses, undergo inspections and pay taxes that the professionals do, even as they provide the very same services.

In New York City, the state attorney general found that 30 percent of Airbnb property owners in New York City offered multiple listings, a sign that landlords were turning entire buildings into "illegal hotels" [source: The New York Times]. In cities like San Francisco and Portland, Airbnb has agreed to levy a hotel tax on every rental, but some are still blaming Airbnb property owners for shrinking the long-term rental market and driving up prices [source: Said].

Ride-sharing companies Uber and Lyft are in equally hot water with state regulators over what they see as companies profiting from fleets of unlicensed, uninsured taxi drivers. Municipalities from Brussels to Buffalo, New York, have banned ride-sharing services on their streets [source: Tuttle]. Ride-sharing supporters argue that America's cities are in the grip of outdated taxi "cartels" that profit greatly from limited competition [source: Chapman].

Something else that may impact the future of the sharing economy is the future of the regular economy. Some critics of the sharing economy argue that we're only interested in sharing because we don't have the money to buy anything. And when jobs are scarce, we're willing to drive around picking up strangers for money [source: Le Tellier]. If the economy picks up, people might opt for ownership again.

The strongholds of the sharing economy are cities with a high volume of young, tech-savvy, well-educated people. San Francisco is ground zero. It requires a certain critical mass of users for these sharing services to function, and it remains to be seen whether smaller cities or rural areas are even interested. In some places, after all, you can still borrow a weed whacker for free from a non-virtual neighbor.

For lots more information on Airbnb, car-sharing and more industry shattering ideas, check out the related HowStuffWorks links below.

One of the most fascinating things about the sharing economy is the issue of trust. Promoters of the sharing economy argue that the face-to-face interactions of a service like Airbnb (owners meet renters to hand off the keys) or Uber (riders are encouraged to sit in the passenger seat, not the back) promote a greater sense of trust in the transaction. And I tend to agree. I'm much more likely to trust an individual over a corporation, even when that corporation is heavily regulated by the government. But is that trust misplaced? Airbnb is quick to note that of the millions of stays it has sponsored, only a handful have resulted in burglary or serious damage. Still, the company carries a $1 million insurance policy on all properties. I believe — and hope — that the sharing economy is here to stay. It puts a premium on entrepreneurship and innovation that our economy sorely needs. But I, for one, am going to stick with the sellers with five stars.