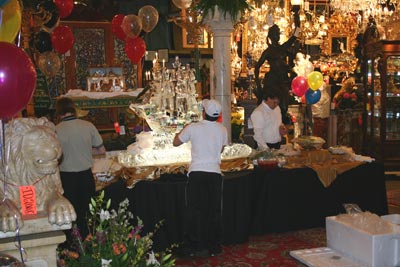 Red Baron's Antiques catering crew puts the final touches on the buffet served the night of the preview party.

The night before the first day of the auction, (usually a Friday) Red Baron throws a preview party at the auction house. The second night of the auction they throw a theme party. Their most recent theme party was a "Pirates of the Caribbean" celebration, which featured a $6,000 cake shaped like a treasure chest. In Atlanta, these parties have become as infamous as the auction itself. The most recent preview party featured several ice sculptures, catering, over five bars, a band, deejay, and a gospel singing group.

The price tag for a typical Red Baron party is over $100,000. Paul Brown explains that the owner Bob Brown has cultivated the Red Baron party tradition because he believes that it's good for the Atlanta community and it's good for business. The parties above all play an important role in making potential customers comfortable.

Shiver me timbers! This impressive cake was one of many extravagant dishes served during the Red Baron auction weekend.