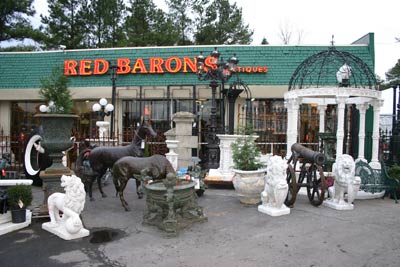 The exterior of Red Baron's Antiques

Red Baron's Antiques grew out of a very different sort of business. Bob and Linda Brown, Red Baron's owners, opened a dress shop in 1976 and decorated the boutique with antiques Bob Brown had purchased at auctions. But before they had received their first dress they had sold every antique in the store.

They decided to try their hand at the antique business. When their store became over-crowded with antiques, the Browns decided to hold their first auction. They gathered the names of everyone they knew who could afford to spend at least $500 and sent them invitations to the first Red Baron's Antiques Auction. Thirty years later each Red Baron auction weekend generates approximately $20 million in sales.

This micromosaic cross was given to the Czech Republic by the Vatican following the fall of the Berlin Wall and the Republic's first free parliamentary elections in 1990. The base of the cross is a detailed mosaic of Vatican Square and the Coliseum. The Vatican Workshops produced the majority of Roman micromosaics. They were popular because the tiny pieces of glass set in stone they used would last longer than other types of paintings in the environment of cathedrals. s were often referred to as "la vera pittura per eternita" or "painting for eternity."