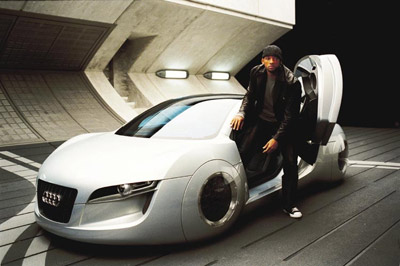 Will Smith and the Audi RSQ
Photo courtesy Audi.com

In 2004, product placement reached a new level with Audi's involvement with the movie "I, ROBOT."

The Audi RSQ concept car plays a central role in the futuristic action film. So how is this different from the placement of the BMW Z8 in "The World is Not Enough" or the DeLorean in "Back to the Future"? Audi didn't just place the RSQ in the movie; Audi created the RSQ for the movie.

The Audi automotive brand has been involved in movies before. Audis have been featured in such movies as "Ronin," "The Insider," and "Mission Impossible II." This time, though, it wasn't just a question of promoting the right car in the right movie. It was a full-blown custom job. And since this custom job was also a product-placement job, the car had to fit seamlessly into the movie world while still screaming "Audi."

The RSQ is not just a movie car -- those have been done before, with movie designers creating a car and simply attaching the highest-bidding car logo to the hood. Audi put the same amount of thought and detail into designing the RSQ as they do into designing any other concept car. It has a fully developed interior and exterior.

The carmaker worked with the director of the movie, Alex Proyas, and with set designers to achieve a concept that both Audi and the movie people were happy with -- Audi designers toured the movie sets and got their hands on the futuristic props used in the film. The result of the collaborative effort is the futuristic RSQ sports coupe, featuring, most notably, spherical wheels, mid-engine design, butterfly-action doors, a color-changing, luminescent paint job and a low, sleek profile.

In the creative partnership between a carmaker and Hollywood, we may be looking at the future of this type of advertising -- name-brand products that are not simply chosen to fill a role that benefits both parties, but products that are created to fill that role.