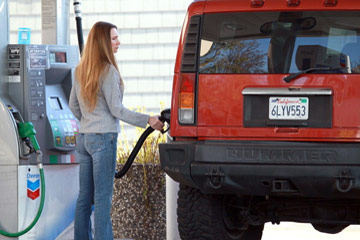 A Chevron customer fills up at a California gas station. Gas prices change daily, but who controls how much you'll pay at the pump?
Justin Sullivan/Getty Images

Critics of any president -- whether the target is George W. Bush, Barack Obama or any of the 42 men who preceded them -- are quick to blame him for things that are totally beyond his control. (Of course, the president and his supporters are equally quick to take credit for things that are beyond his control, but that's another story.) The price of gasoline is a perfect example. When George W. Bush was in office, Democrats blamed him for allowing gas prices to rise from $1.45 a gallon on his inauguration day to $4.05 a gallon by June 2008 [source: Thaler]. And now that Barack Obama is in the hot seat, Republicans are blaming his economic and energy policies for a similar price increase at the pump.

The truth is that no president -- whether Democrat or Republican, "big oil" buddy or alternative fuel friend -- can do much of anything to affect the short-term price of oil, and therefore gasoline. The overriding factor that determines the price of oil from day to day is the market principle of supply and demand [source: U.S. Energy Information Administration]. It comes down to simple economics: When demand is greater than supply, prices rise.

And demand is growing. Emerging superpowers like China and India are approaching the U.S. in their appetite for oil. To further complicate matters, much of the world's oil supply is tied up in the politically unstable Middle East. Unrest in Syria and Libya, and embargoes against Iranian oil put a significant squeeze on the global supply [source: Sommer]. The president can help build a more stable and secure Middle East through foreign policy decisions -- war or diplomacy? -- but these are long-term strategies that don't affect short-term price fluctuations at the pump.

What does affect these volatile price fluctuations at the pump? Find out on the next page.

Gas Prices and the Oil Supply

The actual price of a barrel of oil is constantly changing, since oil is a commodity that is traded on the futures market. Buying and selling oil futures is called speculating, because you're making trades based on expectations of future supply and demand. When Israel threatens to bomb Iran, for example, speculators drive up the price of oil to hedge against a possible shortage in the future. President Obama called on Congress to impose tighter regulations on oil speculators, but even if Congress acted (which it hasn't), the rest of the world would have to follow suit to really affect global gas prices [source: Yetiv].

What about increasing the oil supply? Can't the president boost U.S. production? It's true that aggressive increases in U.S. oil production would bring the global supply closer to the demand for oil. Unfortunately, the U.S. is such a small player on the international oil scene -- we control only 2 percent of the world's oil reserves -- that even if we doubled our current production capacity, we still wouldn't make much of a dent [source: Thaler]. It would also take a number of years to assemble the drilling rigs, pipelines and manpower to make that type of production increase, meaning oil prices would be unaffected in the short-term.

The only way the president can quickly boost the oil supply is by tapping the Strategic Petroleum Reserve, an emergency stockpile of more than 700 million barrels of crude oil stored along the U.S. Gulf Coast. (A barrel of oil equals about 159 liters, or 42 gallons). In June 2011, President Obama released 30 million barrels of oil from the emergency reserves in response to crises in Libya and Yemen. President Bush also tapped the reserves in the aftermath of Hurricane Katrina, temporarily lowering gas prices 10 to 15 percent [source: The New York Times]. Experts agree, however, that these emergency reserves should be reserved for emergencies, not employed as temporary relief to market-driven problems.

In the meantime, President Obama is undoubtedly familiar with the statistic that the incumbent party has lost the presidential election in each of the past five periods of high gas prices dating back to Gerald Ford in 1976 [source: Laskoski]. Republicans know it, too, which is why we're likely to hear a lot of talk about "Obama's" high gas prices all summer.

For lots more information about energy, alternative fuels and presidential politics, head to the related links on the next page.

While gas prices might be a controversial topic for politicians, it's an easy one for economists. Virtually all economists agree that the U.S. president has very little control over the global price of crude oil, and therefore the local price of gasoline. If we can't rely on our leaders to help lower our fuel costs, we should rely on ourselves. The hard truth is that it's within our power to decrease the amount we spend on gas simply by driving less. I say it's a hard truth, because like most of you I depend on my car for all sorts of "important" things and resist the idea of cutting back. If I could afford a brand new hybrid, I'd buy one in a heartbeat. In the meantime, the best thing I can do to lower gas prices is to lower the demand, one "staycation" at a time.