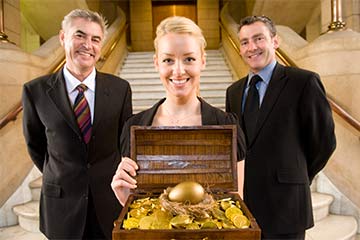 Though retirement may seem a long way off, you may need to decide now whether you should contribute to your employer's traditional 401(k) or Roth 401(k) plan. It'll take some information and some prophecy.

First, understand the differences between the plans. Next, take an honest look at your current financial state. Finally, peer into the future to predict what your assets will be when you're ready to start withdrawing retirement funds.

With a traditional 401(k) retirement plan, you deposit nontaxed funds, and the earnings are also not taxed while you're building your nest egg. You pay taxes only when you take out money from your account. At that point, both contributions and interest are hit. If your employer also contributes, taxes are also postponed on those amounts. In a Roth 401(k), any contributions you make have already been taxed, though additional income --such as interest -- is not. When you start pulling money out, you can celebrate, because you pay no taxes on your savings.

To choose between a traditional or Roth 401(k), consider your present tax rate. If you're currently in a high tax bracket, having a traditional 401(k) avoids having to pay significant taxes on your contributions right now. Then consider: What's your economic forecast for retirement? If you think you'll be in a lower tax bracket, you'll end up with more total money, even after paying taxes on withdrawn funds.

A Roth 401(k) is a good option if your current tax rate is relatively low. Therefore, your contributions won't take too much of a hit if they're taxed now. Also, if you expect your earnings to increase, chances are you'll be in a higher tax bracket at the end of your career. That's the time to avoid taxation. In this case, you'll probably end up paying less tax with a Roth 401(k).

You have a couple more details to consider when making the retirement plan choice. If there's any chance you'll have to remove funds early, you pay a 10 percent penalty on that money if it's in a traditional 401(k). However, in a Roth 401(k), only earnings –- not contributions –- are taxed upon premature withdrawal. Also, if both plans are available to you through your employer, you are allowed to split your contributions between the two. Making the best choice for your future involves collecting data: Inspect your current options, analyze your present position and anticipate your future status. A crystal ball wouldn't hurt either.