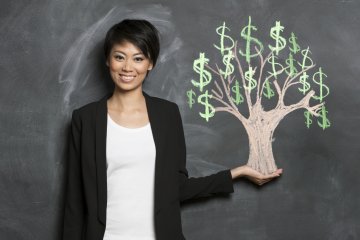 Picture the inside of a classroom. Depending on the grade, the room might be full of colorful paper cutouts of animals on a bulletin board, each illustrating one of the letters of the alphabet. Perhaps you see posters of important historical figures on the wall, or the periodic table. Elementary school teachers might have a supply of crayons and markers; junior high teachers might keep a little library of books. In a kindergarten classroom, you can bet any teacher has a stash of underwear, just in case a five-year-old doesn't quite make it to the bathroom fast enough.

In general, the school or its parent district often can't provide all those supplies and extras you see in a public school classroom. A kid in the class can't afford a binder? The teacher is probably going to pay for one out of pocket. An educator needs to buy loads of construction paper to give the kids a fun afternoon of snowflake-making before winter break? That's coming straight out of the teacher's personal funds.

Until 2013, educators had a bit of tax relief after shelling out their own bucks for teaching supplies. When it came to tax time, they could deduct up to $250 for any supplies they bought out of pocket. This was an above-the-line deduction, meaning that it was especially useful – it would subtract $250 from an educator's adjusted gross income and lower that person's overall taxable income. Considering that a poll in New York City found that the average public school teacher was paying $500 a year for school supplies, this was a decent break [source: Chapman].

Unfortunately, it wasn't a tax break that legislators were desperate to keep. Congress chose not to renew it – along with a number of other breaks – after 2013 [source: Johnston]. So at least for now, unless Congress passes a bill that renews it retroactively, educators are on their own for school supplies. (It hadn't as of Aug. 18, 2014.)

If you're a teacher on the lookout for a deduction, there is one more way you may be able to deduct some supply expenses. If you itemize your deductions, you can claim unreimbursed employee expenses. However, the rules are strict: You can only claim expenses in excess of two percent of your adjusted gross income (AGI). So if your AGI is $50,000, you have to spend at least $1,000 on school supplies, and only the amount over $1,000 can be deducted [source: Phillips Erb].

How to Apply for a Homestead Exemption
These Folks Retired in their 30s and 40s: Can You Do It Too?
How to Shop for Mattresses