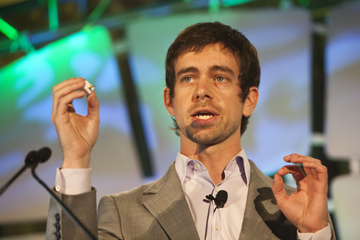 Jack Dorsey, creator of Twitter and founder of Square, holds up the Square device as he speaks during the TechCrunch Disrupt conference in New York in 2010.
© Ramin Talaie/Corbis

Jack Dorsey, the founder and CEO of Square, is a self-proclaimed minimalist. Dorsey's first success story was Twitter, which he co-founded in 2006 [source: Delevett]. Part of Twitter's charm is its simple design and creative restraint — every post is capped at 140 characters or less. Square is marketed as a minimalist approach to running a retail business. Instead of buying an expensive point-of-sale system or dealing with bureaucratic credit card companies, just download a free app and go.

Unfortunately, some business owners have found that Square's "simple" sales pitch leaves out some important details about its merchant policies. One of the biggest complaints concerns a deposit limit of $2,002 a week on manual or "keyed-in" credit card transactions. Square charges more for keyed-in transactions because these carry a higher risk of fraud [source: Accertify]. That's the same reason Square puts a limit on how much money a merchant can deposit each week using the keyed-in method.

For a larger business that processes hundreds or thousands of transactions each week, it's easy to reach that $2,002 limit. According to complaints to the Better Business Bureau (BBB), many business owners were unaware of the policy, which holds all deposits in excess of $2,002 for 30 days [source: BBB]. In response, Square notes that all customers can request to raise their deposit limit [source: Square]. Requests are processed on a case-by-case basis.

One of the most widespread criticisms of Square is its poor customer service. Merchants with questions about rejected transactions, canceled accounts and held funds complain about the lack of a phone number staffed by actual human beings. Instead, Square encourages customers to search its ample online help resources (FAQs, video tutorials, how-tos), send an e-mail or visit its support account on Twitter. Although Square insists that it responds to all e-mails within 24 hours, frustrated merchants complain of unanswered e-mails and costly unresolved conflicts [source: Parker].

Square's competitors in the mobile payment industry see customer service as a way to topple the upstart company. PayPal, for example, employs 6,000 people in its customer service department. The entire staff of Square, headquartered in San Francisco, totals fewer than 500 people [source: Kim].

For lots more information about mobile payments, virtual wallets and the future of money, check out the related links below.

I can easily envision a day when my grandchildren will ask me what money looked like. Even today I feel a little strange using actual cash (or coins, for heaven's sake) to make a purchase. Why are we still passing around these wrinkled pieces of paper when the entire financial system is electronic? It's not as if your bank has a stack of cash waiting in a vault with your name on it. Money is transferred in and out of your bank account as a string of ones and zeros. Why should our transactions at the mall be any different? Cash equals hassle. You have to go to an ATM to get it. A store has to count it, stash it in an envelope and lug it down to the bank to deposit it. And don't even get me started on checks! Obviously there are obstacles to a cashless economy. What about people who don't have bank accounts or credit cards? What about fraud, identity theft and other security concerns? Still, I believe that I'll see the death of cash in my lifetime. I'll bet you a two-dollar bill.