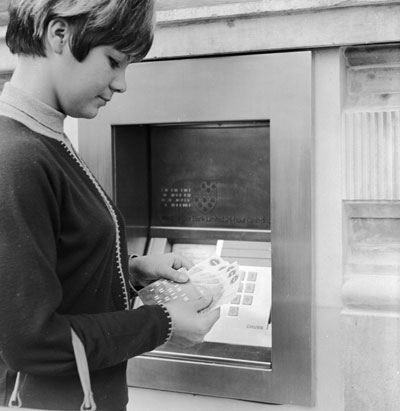 Peter Ruck/BIPs/Getty Images
A woman counts her cash after a withdrawal from the first cashpoint machine in London, in 1967.

For 30 years, financial institutions have been on a quest to satisfy their customers’ need for more convenience. First came the automated teller machine (ATM), which New York’s Chemical Bank introduced to the American public in 1969. It did little more than dispense cash at first, but the ATM evolved over time to become a true bank-away-from-bank, providing a full suite of financial transactions.

Then came Internet banking in the mid-1990s, which enabled consumers to access their financial accounts using a home computer with an Internet connection. Despite its promise of ultimate convenience, online banking saw slow and tentative growth as banks worked out technology issues and built consumer trust. Today, Internet banking has reached a critical mass, with about 35 percent of U.S. households conducting bank transactions online [source: Information Week].

Yet banking at the living room computer still has some serious limitations. First, only 62 percent of American households have a computer, according to a 2003 study conducted by the U.S. Census Bureau. And only 28 percent of Americans have broadband Internet access, which is essential to efficient, convenient service [source: GAO]. The biggest issue, however, is mobility. Even with a laptop, it’s almost impossible to stay connected in virtually any location on the planet.

Not so with mobile phones. They can be carried anywhere and are -- by an enormous number of people. More than 238 million people in the U.S. have mobile phones. That’s a whopping 78 percent of the population. And worldwid­e there are more than 3.25 billion mobile phone subscribers, with penetration topping 100 percent in Europe [source: ZDNet].

If mobile phones only delivered voice data, then their use as a vehicle to deliver banking services would be limited. Most phones, however, also provide text-messaging capabilities, and a growing number are Web-enabled. That makes the mobile phone an ideal medium through which banks can deliver a wide variety of services.

Banks classify these services based on how information flows. A pull transaction is one in which a mobile phone user actively requests a service or information from the bank. For example, inquiring about an account balance is a pull transaction. So is transferring funds, paying a bill or requesting a transaction history. Because banks must respond or take some action based on the user request, pull transactions are considered two-way exchanges.

A push transaction, on the other hand, is one in which the bank sends information based on a set of rules. A minimum balance alert is a good example of a push transaction. The customer defines the rule -- "Tell me when my balance gets below $100" -- and the bank generates an automatic message any time that rule applies. Similar alerts can be sent whenever there is a debit transaction or a bill payment. As these examples illustrate, push transactions are generally one way, from the bank to the customer.

You can also classify mobile banking based on the nature of the service. Transaction-based services, such as a funds transfer or a bill payment, involve movement of funds from one source to another. Inquiry-based services don’t. They simply require a response to a user query. The chart below summarizes these various types of mobile banking services.

Clearly, push transactions are not as complex as their pull counterparts. Mobile banking solutions also vary in their degree of complexity, and some only offer a fraction of the services you would find in a bricks-and-mortar branch. In this respect, mobile banking isn't always full-service banking. The factors that affect this are the type of phone being used, the service plan of the mobile subscriber and the technology framework of the bank. We’ll look at these technologies next.