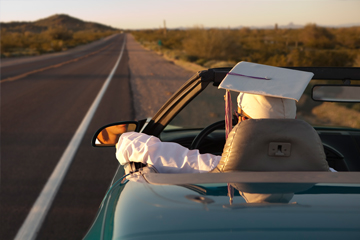 Car loans tend to have lower interest rates than student loans, and the loan terms are much shorter.
John Scott/Getty Images

It's a really bad financial strategy to use student loans to buy a car. And technically, you aren't even allowed to use federal student loans for car purchases — although if you did, you probably wouldn't get caught.

Let's look first at the federal student loan situation. Federal student loans are backed by the government and generally offer lower interest rates than private student loans, so they carry more restrictions. These loans are intended to help with the costs of higher education. Approved costs generally include tuition, room and board, textbooks and transportation — although they explicitly exclude cars. In other words, you can use a federal student loan for a bus pass to get to and from campus, but using it to finance your own set of wheels is a big no-no [source: Hardeman].

When students apply for federal financial aid, they must agree that the money they receive will be used only for those aforementioned expenses. That said, no one ever comes asking for a list of receipts. (We're not advising this use of funds, just noting that it's unlikely to have legal consequences.) Of course, federal student loans aren't the only game in town, and many students rely on a combination of federal and private loans to get through college. There are a lot of sources for private student loans, and they all have their own rules. For the most part, private student loan rules echo the federal guidelines, but since private lenders typically benefit more from the higher interest rates they charge, they might be a little more accepting of students who use that cash to finance a vehicle.

Which brings us to the financial strategy consideration. If you're a student who absolutely needs to buy a car while in school and financing it is the only way, get a car loan instead of using student loans. The interest rates will be lower, and the loan term will be much shorter [source: Ritchie]. Granted, you'll need to start making monthly payments right away, and that's hard for a lot of students to manage, so the impulse to roll the car into the student loans and not worry about it for four years is understandable. However, interest (likely at a high rate) will be accruing during those four years, after which the car in question will be at least four years old and will have lost much of its value — even though you'll be just starting to pay for it at a higher cost than it was originally worth. By the time the student loans are paid off, that car will probably be a distant memory. Financing an education over the course of a decade — or longer — is one thing. Financing a car is another.

How Stocks and the Stock Market Work
10 Surprising Tax Preparation Tips
What are some FSA tax benefits?