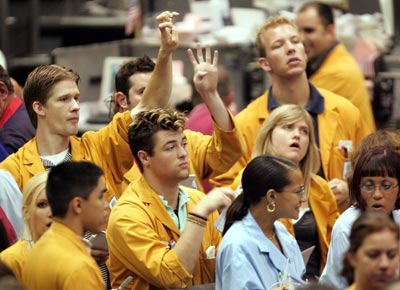 A mad rush ensues at a Chicago Cattle Futures pit upon the discovery of a Mad Cow outbreak in Iowa.
Scott Olson/Getty Images

Single stock futures can be risky investments when purchased as standalone securities. There's a possibility of losing a significant chunk of your initial investment with only minimal market fluctuations. However, there are several strategies for buying stock futures, in combination with other securities, to ensure a safer overall return on investment.

One of the most effective stock future strategies is called hedging. The basic idea of hedging is to protect yourself against adverse market changes by simultaneously taking the opposite position on the same investment.

Let's say you buy a share of traditional stock at $50. To make money with that stock, the price has to go up over time. But that's not necessarily true with stock futures. In addition to buying the stock, you could take a short position to sell the same stock on the futures market in three months. This way, even if your stock price goes down in three months, you'll make up some – or even more – of the money on the futures market.

Another way to hedge stock futures investments is through something called a spread. A calendarspread is when you go both short and long – which we learned about earlier – on the same stock future with two different delivery dates. For example, you could enter into two different contracts involving IBM stock. In the first contract, you agree to sell 100 shares after a month. In the other contract, you agree to buy 100 shares after six months. Using this strategy, you can make money off of both short-term losses and long-term gains.

An intermarket spread involves going long and short on two different stock futures in a related market – like gas and electric companies – with the same delivery date. The hope is that one stock future's loss will be the other stock future's gain.

A similar technique is a matched pairspread in which you enter a futures contract to buy shares in two directly competing companies. The idea is that Microsoft's loss is Apple's gain and vice versa. If this always happened, your investments would always break even. The hope is that one future will outperform the other without necessarily inflicting equal damage on the competition.

If hedging and spreads lower the risk associated with investing in stock futures, then speculating substantially increases it. With speculating, an investor is looking to quickly cash in on market fluctuations. By investing on margin with large amounts of money, the speculator tries to predict short-term movements in stock prices for the maximum amount of gain.

What are some of the advantages and disadvantages of stock futures in relation to traditional stocks?