by the Editors of Publications International, Ltd.
Prev NEXT
7 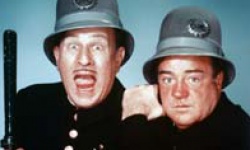 The famous comedy team of Bud Abbott and Lou Costello seemed to work extremely well together, especially in their famous "Who's on First?" routine. But to protect against a career-ending argument, they took out a $250,000 insurance policy over a five-year period. After more than 20 years together, the team split up in 1957 -- not due to a disagreement, but because the Internal Revenue Service got them for back taxes, which forced them to sell many of their assets, including the rights to their many films.