by John Perritano
Prev NEXT
7 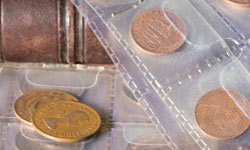 Coin collectors search for rare coins that are in good condition.
Thinkstockphoto.com/Valeriy Velikov

How much is a penny worth? If it's a 1943 bronze Lincoln penny then it's worth $1.7 million. That's what a southwestern businessman bought the coin for at auction in September 2010. The penny is so valuable because the U.S. Mint in Denver mistakenly struck the coin in bronze rather than zinc. The government needed copper -- the metal of choice for pennies -- for the war effort during World War II [source: Auction News Network].

Still, before you break open the piggy bank or check behind the sofa for loose change, there are some things you ought to know. Numismatists, or coin collectors, look for rare coins that are in good condition, freshly minted or old [source: Richards].

Beware! Some coin dealers will often tell you something is rare, when it's really not. According to the American Numismatic Association, price guides are indispensible. If you don't take the time to educate yourself, you'll pay more than the coin is worth. Buying from the U.S. Mint is a good idea. The government has struck a number of commemorative coin sets. Nearly all have increased in value [source: usmint.gov].