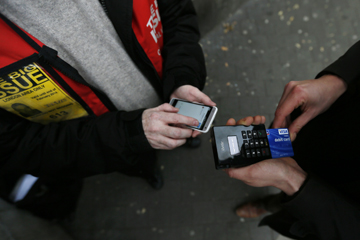 A street newspaper vendor (L) uses his Chip and PIN device outside the South Kensington Tube Station in London, 2013. Chip and PIN cards are widely used in Europe.
© STEFAN WERMUTH/Reuters/Corbis

Every credit card holder in America knows the "swipe and sign" checkout ritual. Line up the magnetic stripe, swipe the card, press "OK" for the amount to be charged, and then sign your illegible scrawl on the screen. The swipe and sign system is so common in U.S. that American travelers are often shocked to learn that almost no other country still does it this way. The international standard for credit card security is called "chip and PIN," and it's now in American wallets.

With chip and PIN cards, the credit card data is stored on a tiny computer chip — not a magnetic stripe — and customers punch in a four-digit PIN (personal identification number) instead of signing the screen.

In the wake of the data breach, Target pledged to switch its store-branded credit and debit cards to the new chip and PIN technology [source: Harris]. Visa and Mastercard announced similar plans to switch from magnetic stripes to chip and PIN by October 2015 [source: Gara].

What will the credit card switch mean for the average American consumer? Are chip and PIN cards really more secure than magnetic stripes? And what if you want a chip and PIN card now? Do American stores even accept them?

Let's start with a quick history of chip and PIN technology and how it really works. 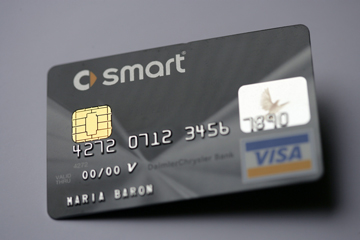 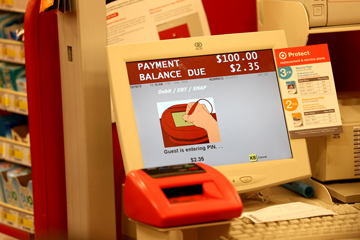 A typical credit card reader at Target stores gives the customer the option of entering a PIN number or signing. With the massive credit card breach Target experienced, it has switched to Chip and PIN store cards.
Joe Raedle/Getty Images

The Target data breach during the 2013 holiday shopping season was the largest incident of credit card theft and fraud in the history of retail. The hackers — who were never caught — got their hands on the personal data of millions of Target customers [source: Floum]. It served as a wake-up call to corporate America about the costs of credit card fraud, both to their bottom line and their reputation.

American consumers account for a quarter of credit card purchases worldwide, but are the victims of 50 percent of the world's credit card fraud [source: Floum]. The rate in the U.S. has doubled since the early 2000s as chip and PIN cards spread across Europe [source: Schneider].

As the Target hackers demonstrated, data encoded in old-school magnetic-stripe technology is relatively easy to steal. Magnetic-stripe credit cards are also much easier to counterfeit than chip and PIN varieties. And magnetic-stripe cards offer almost no protection against the most basic kind of identity theft: stealing someone's wallet or purse. Since magnetic stripe cards require no PIN, a thief can simply scrawl a bogus signature — does your "digital" signature look anything like your real one? — and walk away.

The biggest reason chip and PIN cards are more secure than magnetic stripe cards is because they require a four-digit PIN for authorization. That's the easiest way to know that the cardholder is the real owner of the card. Also, since all data and communications are protected by cryptography, that makes chip and PIN cards infinitely more difficult to hack.

However, neither magnetic stripe nor chip and PIN cards offer much protection against fraudulent online purchases. In fact, in the U.K., while in-store credit card fraud has declined greatly, fraud from credit card use over the phone or Internet has exploded [source: Bell].

In Western Europe, more than 80 percent of all credit cards feature chip and PIN technology, and 99.9 percent of card readers are equipped to read them. In Canada and Latin America, the adoption rate of chip and PIN cards is about 54 percent [source: EVMCo]. The U.S. has resisted the switch, making American consumers and their credit cards the "low-hanging fruit" for hackers. But not any longer.

Chip and PIN in America

Why is the United States one of the last countries in the world to adopt chip and PIN credit cards? First of all, America has a strong telecommunications infrastructure, making it easy to instantly authorize purchases made with a magnetic-stripe card, so offline capability is not so attractive. Second, credit card fraud was historically concentrated in other countries, which made them more eager to embrace chip and PIN technology.

Finally, it will cost American retailers and banks around $8 billion to make the switch, between upgrading the credit cards themselves as well as the readers used in retail establishments [source: Schneider]. (It costs around $2 to produce and distribute a magnetic card and $15-$20 to produce and distribute a chip and PIN card [source: Bell].) And, the credit card market in the U.S. is so large and complex — more than 15,000 American banks issue cards — that it's more difficult to implement widespread changes than in countries with a more centralized banking and credit system [source: Ghahremani].

But, high-profile attacks like Target's and the rising concentration of credit card fraud in the U.S. have changed minds. America's largest two credit card companies, Visa and MasterCard, have a roadmap in place for switching over to chip and PIN credit cards by October 2015. Visa and MasterCard won't force banks and merchants to issue the new cards, but they will hold them liable for fraud that occurs with older, magnetic-stripe cards [source: Gara]. In preparation for the switch, large retailers like Wal-Mart and Target have already invested in checkout terminals that can process chip and PIN cards [source: Schneider].

For lots more information on how credit cards work, how to avoid identity theft, and tips for traveling abroad, check out the related HowStuffWorks articles on the next page.

In the U.S. market, expect to see a lot of so-called "chip and signature" cards. These hybrid cards include the new chip technology, but still require a signature — not a PIN — to authorize the charge. Chip-and-signature cards are seen as a "half-step" that offer better security, but are still not universally accepted abroad [source: Kiernan].

The world is such a different place than when I first traveled abroad 20 years ago. Back then, ATM machines were still a relatively new luxury in many countries and the foreign transaction fees for ATM withdrawals and credit card purchases were through the roof. Most international travelers still relied on traveler's checks, which offered protection from loss or theft, but still had to be cashed in for the local currency. It's good to see that U.S. banks are finally catching up with a technology that's already standard abroad. It will make it even easier for Americans to travel without the hassle of making currency conversions or fumbling with an unmanned ticket kiosk at a train station that doesn't recognize our out-of-date magnetic-stripe cards. If the technology switch works, maybe we can even start talking about the metric system. Nah!