How can low-income students attend Ivy League colleges for free? 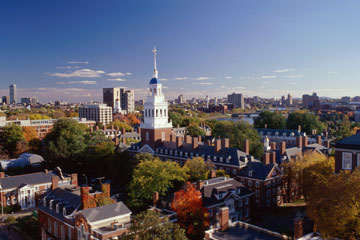 College Image Gallery If you'd like to stroll through the streets of Cambridge, Mass., as a student, there might be a financial aid plan to suit your needs. See more college pictures.
Steve Dunwell /The Image Bank/Getty Images

For decades, low- and middle-income families have increasingly found themselves priced out of attending top private universities. Higher education has far outpaced general inflation -- 5.94 percent vs. 2.99 percent from 1989 through 2005 [source: Sopelsa]. Ivy League schools like Harvard, Columbia, Princeton and Brown now cost in the area of $50,000 a year including tuition and room and board.

The lowest-income students are the least able to shoulder an Ivy League tuition -- a family making $30,000 a year can't spend $50,000 a year for college. But the Ivies, partly under public pressure to put more of their endowments toward need-based aid and partly out of a real attempt at egalitarianism, have some pretty amazing financial aid programs. In some cases, Harvard or Columbia or Yale can end up costing less than a state school.

In some cases, they can cost nothing at all.

In this article, we'll find out how low-income students can earn an Ivy League degree with no financial contribution. We'll check out the details of a few representative aid programs, see who qualifies for a free ride, and look at financial-aid deadlines and procedures for those interested in applying.

There was a time when "low-income" families lived in one-bedroom fifth-floor walk-ups with drapes dividing the kitchen from the bathroom. You may be surprised to find out who's low-income now.

Ivy League Schools on the Cheap

It's a testament to the skyrocketing cost of college when the average salaries of architects, urban planners and accountants can qualify as "low-income," but there it is [sources: MSN, CareerBuilder]. Many Ivy League schools, including Harvard, Columbia and Princeton, have increased the upper end of the "low-income" designation to above the average salary in the United States, which is about $50,000 [source: US News & World Report].

In 2001, Princeton introduced an all-grant financial aid system that paved the way for sweeping changes in Ivy League payment programs. Most of these elite schools have eliminated loans, instead providing only "free money" in their financial aid packages, which typically includes some combination of grants and work-study jobs.

Princeton, Harvard and Columbia, along with most other Ivies, have also adjusted their financial aid systems to cover the entire cost of attendance for students whose families bring in less than $60,000 annually. That number, which used to be closer to $40,000, means applicants who once had to give up an Ivy League education for financial reasons can now attend without an economic care. Those full rides typically cover everything except miscellaneous expenses like books and school supplies, often referred to as "fees." Sometimes even those fees are eliminated in low-income aid packages.

And speaking of inflation, those schools have also raised their middle-income designation, which qualifies for significant financial assistance, to include families earning hundreds of thousands of dollars a year. Princeton now covers almost 60 percent of tuition expenses for students whose parents bring in $200,000 annually [source: Princeton]. And families with $180,000 in income will only pay up to 10 percent of that income per year to attend Harvard.

In terms of expanding the economic diversity of Ivy League student bodies, providing more money to more people is working out. The number of students applying to Harvard increased 17 percent between 2007 and 2008; and between 2004 and 2007, the number of Harvard students whose family incomes qualified them for federal Pell Grants increased by 3.2 percent [sources: Sopelsa, Lehecka]. The low-income bracket increased 0.6 percent at Princeton during the same period [source: JBHE]. That may not seem like much, but at Ivy League schools, Pell-grantees had been plummeting since the late 1990s -- down by one-third at University of Pennsylvania and one-fifth at Cornell, at the extremes [source: Bloomberg]. The up-tick has to start somewhere.

To take advantage of the Ivy drive toward a financially level playing field, certain procedures must be followed. Checking school deadlines early is job one.

Liquor magnate Sidney Frank, who brought brands like Grey Goose vodka, Jacques Cardin brandy and Jägermeister liquor to the mainstream, has been helping low-income students get to the Ivy League since 2004. Frank briefly attended Brown University and credits the school with starting him on the road to success. The school grants about 35 full scholarships a year from Frank's $100 million endowment [source: Hanna].

Below, you'll find information about the admissions and financial aid policies of each Ivy League school.

For more information on Ivy League schools, financial aid and related topics, look over the links on the next page.