Should race still be a factor in college admissions?

Browse the article Should race still be a factor in college admissions? 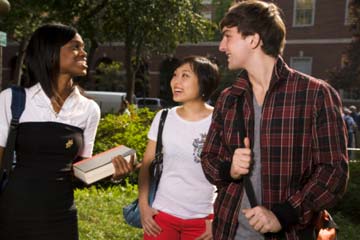 Many states allow race to be a factor in college admissions decisions, but some have banned the practice, saying it shouldn't be a necessary means to attain racial diversity on campuses.
Rachel Watson/Getty Images

Today, college classrooms in the United States are more racially diverse than they looked in the 1960s. This change is namely the result of affirmative action, an idea presented by President John F. Kennedy with an executive order and reworked by President Lyndon Johnson as another executive order that prohibited publicly funded companies from discriminating based on race, color, gender, national origin or religion. This included public universities and colleges and marked a decisive change in the college admission process.

As college admissions officers worked to balance diversity and credibility, they eventually began using quotas -- for instance, universities might require that 15 percent of the student population be black students. However, in 1978, the U.S. Supreme Court ruled in Regents v. Bakke that public universities could not set forced quotas, but they could still consider race among other factors in admissions decisions.

The issue has continued to evolve and be debated over the years. In 1996, California passed Proposition 209, prohibiting the use of race in regards to public university admissions in the state. That same year, a Supreme Court ruling in the case Hopwood v. Texas accomplished the same thing. However, moving forward to 2003, the Supreme Court ruled in Grutter v. Bollinger that, once again, race can legally be considered in the college admission process, as long as it is only one of several factors [source: Cornell]. One study on the subject found that, as of 2004, one-third of public colleges and private institutions claim to consider race in their admissions [source: Grodsky].

However, as societal and educational standards evolve, many leaders, educators and students still debate whether race should continue to be used at all as a factor in college admissions.

The argument for considering race, supporters say, is that it helps create more diversity in schools and provides a leg-up to some students who might need it. Proponents argue that a diverse student body helps prepare students for their careers and life outside school. But critics fear that universities concerning themselves with race may be passing up equally or more talented students for the sake of reaching a goal. It's a heated and difficult argument with valid concerns from both parties, but one thing is clear: The push for a change in one direction or another appears to be inevitable as supporters on each side continue to raise the issue.

Many political, judicial and educational leaders are driving the issue forward, and their actions may offer some insight into what role race might play in college admissions in the future. But first, we'll take a look at how race is used in the admissions process today.

How Does Race Affect College Admissions?

There have been several precedents changing the college admissions process over the years. For instance, many states, such as California and Michigan, have banned the use of affirmative action in admissions decisions at public colleges. Also, where quotas are no longer allowed, goals are. This means public colleges and universities can strive to have a certain percentage of minority students, but they cannot turn away other qualified applicants in order to reach this goal.

Private schools and private historically black colleges and universities that don't receive public funding can operate with a bit more leniency. They are still required by law not to discriminate; however, smaller, private schools may be able to consider race by more closely considering each application, compared with many larger, public schools that have a large influx of applicants.

Public schools without the ability to consider race as a factor may turn to other methods in order to attract more racially diverse applicants. These might include using minority students in outreach programs or spending more time recruiting at high schools with a high rate of diversity [source: Lewin].

In addition, admissions counselors often look beyond test scores and GPAs to weigh other factors, such as socioeconomic status. For example, many lower-income high schools don't offer Advanced Placement classes, so students there wouldn't have the opportunity to earn a weighted GPA above 4.0. If colleges only looked at the numbers, the students from higher-income regions might have more of an advantage simply because of the course offerings at their schools.

This type of multi-faceted approach to the admissions process can naturally bring about a more diverse student population as admissions officers get to know applicants' backgrounds as opposed to just the hard numbers. And, in some cases, considering other things such as socioeconomic status may bridge the minority gap in itself [source: Leonhardt].

When it boils down to the hard facts, most colleges and universities are concerned mainly with attaining a high graduation rate. The better your chance of completing your degree, the better your chance of being accepted. In the end, race -- if allowed to be considered at all -- is only one of the many factors college admissions officers can use when deciding to accept students.

On the next page, we'll hear from political and educational leaders and see whether race should continue to be considered in admissions at all.

The Future of Race and College Admissions

The use of race as a factor in college admissions appears unlikely to end entirely anytime soon, though how it will be used in the future is yet to be seen. Students, educators and others argue for various types of change through essays, research and legal challenges. Some believe affirmative action did its job and that it's time to eliminate it completely. Others say it's a work in progress and needs to be reshaped to fit the modern needs. Others argue it is still needed and should be used to its full degree to help any minorities that might need assistance.

President Barack Obama -- who has backed affirmative action but also shown some support for a system focusing on class rather than race -- weighed in during a campaign interview in 2007. "If we have done what needs to be done to ensure that kids who are qualified to go to college can afford it, then affirmative action becomes a diminishing tool for us to achieve racial equality in this society," he said [source: Robinson].

And affirmative action opponent Ward Connerly, a former member of the California Board of Regents who was a key figure in advancing the state's Proposition 209, has said, "Every individual should have the same opportunity to compete. I don't worry about the outcomes" [source: Lewin]. Connerly has also showed his support for similar movements in other states, such as Utah. As of early 2010, lawmakers there were working on a resolution to amend the state constitution to ban affirmative action in university admissions [source: McKitrick].

However, supporters of preference-based admissions are working to effect change, too. Also during early 2010, a group of students represented by a civil rights group launched a class-action lawsuit to get the affirmative action ban at California universities reversed [source: Lieff].

So, as for whether race should still be considered in college admissions, the nation's political and educational leaders vary in their opinions. It's clear public colleges and universities are facing changes in their admissions processes, but for now, the national judicial system has ruled that -- in most states -- race can be used as a factor.

Ultimately, the goal for the issue's proponents and opponents alike is for all college applicants to be treated equally and fairly with every qualified person being given a chance at higher education, regardless of race, ethnicity, gender or economic status.

Read on to discover lots more information on college admissions and the factors considered in the decision process.

Race as a Factor in Admissions Around the Globe