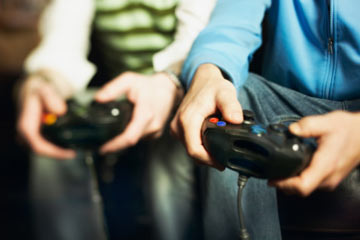 You can save some cash by opting for used video games, found locally, online or even by trading with your friends.
Brand X Pictures/Thinkstock

You might miss out on that "fresh out of the box" smell, but otherwise, why not buy used? Games can be purchased at a fraction of their original cost and many stores back their used purchases in the same way they back their new games. You'll have to show some patience until just-released titles make their way to the used section of your local game store, but otherwise buying used can prove beneficial.

Notice that you've got some games on your shelf gathering dust? Don't miss out on this opportunity to upgrade your library. Just because you've grown tired of those games doesn't mean someone else wouldn't love to have them. One person's trash is another person's treasure, right? Take your used games into your local game shop -- they can tell you what they're willing to pay for those old titles. It's all a matter of supply and demand. If the game you've mastered and put on the shelf is extremely popular, you'll probably be surprised how much it's worth. Even an old game console which is of no value to you may be worth a great deal to another gaming enthusiast -- particularly if you sell it on eBay or Craigslist. Check around to get an idea of what your old property is worth before you hand it over.

If you're a buyer, don't forget that new doesn't always mean better. Smaller retailers like Gog.com specialize in older games at cheap prices. If you're new to gaming, an old classic can be every bit as exciting to play as a pricey just-released game.