5 Tips for Selling Your Used Books 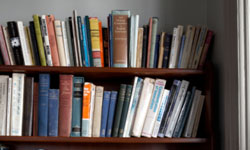 Get an idea of how much your books are worth by searching online.
Heidi Coppock-Beard/Photodisc/Getty Images

Instead of a yard sale, some prefer the convenience of selling their used books online. (You could also try both, of course.) Although you don't have to do so much planning or physical set-up, keep in mind that selling online means you'll have to ship the books -- so you'll probably want to ask the buyer to cover shipping, which will add to his or her costs.

Amazon.com and eBay are two of the most popular Web sites for selling used books, but there are others, as well. One of the most important details to include is the condition of the book you're selling. Conditions range from "new" to "poor," with other descriptions such as "like new" and "acceptable" somewhere in between. Of course, you don't want to hurt your chances of selling a book by describing it in worse condition than it is. But you also don't want to hurt your credibility as a seller by describing it in better condition than it is. In that case, a buyer can file a complaint and, if you don't cooperate to resolve the dispute in good faith, the site's administrator can terminate your account.

If you want an idea of how long it will take to sell a given book online, author Michael E. Mould recommends checking where the book falls on Amazon's sales ranks. The higher it ranks, the more quickly it will sell. He says it's likely that a book in the top 100,000 will sell within a week, whereas a book lower than one million might take more than 18 months [source: Mould].