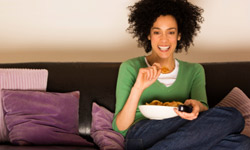 If you adore movies and films but can't stomach the price of current movie theater prices, fear not! We've got some tips for you.
iStockphoto/Thinkstock

You've seen them cracking up in the corners of coffee shops: Pulling out a pack of smokes, one asks, innocently enough, "Smoke?"

"I quit," says the other. Then after a pause, "What, you got one?" Inexplicably, they both start high-fiving their own cleverness.

"In the flesh, Mr. White," the other one replies.

If you are a movie buff like these guys, you'll probably be celebrating their cleverness as well. You might even dip by their table to introduce yourself as "Mr. Nice Guy."

Mr. Pink, Mr. White and Mr. Nice Guy are, as many movie buffs would know, the stars of Quentin Tarantino's "Reservoir Dogs" Diehard fans of the film can easily quote whole scenes of dialogue; they're probably also theater junkies, perpetually on the hunt for another cult classic to dissect with friends.

Unfortunately, in these tough economic times, with theater ticket prices averaging more than $8 and reaching as high as $20 for certain 3-D IMAX experiences, many cinephiles can no longer afford to go to the theater as often as they once did [source: Verrier]. In this article, we explore five ways a movie buff can satisfy his or her bug without breaking the bank. Is online streaming the future of film? Find out next.

5: Online Streaming - The Future of Film

New York Times writer David Pogue calls it the "glorious future" -- movies that stream from the Internet on demand to our televisions, laptops and phones. As wireless technology makes higher-quality picture resolution possible at ever faster download speeds, it has become easier and more feasible than ever to stream movies online.

You've probably heard of Netflix, YouTube and iTunes, but they aren't the only players in the movie-streaming game. Several companies have jumped into the fray. Some, like Sears Holdings Corp., which paired with Alphaline Entertainment to launch an online movie streaming site in 2010, fold almost as soon as they start. Others, like Zediva, Inc., run afoul of the law and are forced to shut down (Zediva thought it had found a legal loophole in copyright laws by legally purchasing DVDs and streaming them one at a time, jukebox-style, from banks of standard DVD players. Sadly for cinephiles, the courts did not agree, and Zediva recently lost its lawsuit).

Netflix, YouTube, Blockbuster, iTunes and countless other sites, however, are still in the streaming game. Movie buffs will want to pay close attention as these contenders spar over everything from price models to rental periods. For the moment at least, there are plenty of free and affordable movies to be found online. For movie lovers who can't bear the iffy picture quality, annoying re-buffering and spotty selection of online streaming, cheap DVD rentals are another good budget bet. We explore those next.

4: Not Your Mama's Video Rental 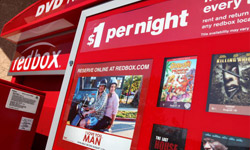 Redbox is a cheap way to rent DVDs (and get your movie fix).
Justin Sullivan/Getty Images News/Getty Images

Most of us still fondly remember family movie nights. Mom or Dad, usually with at least one or two kids in tow, would be dispatched to the video store to pick up a video. After much milling about in the aisles ("Breakfast Club! Can we pleeeeeaaaase get Breakfast Club?"), the night's entertainment would be grudgingly selected. Someone would pop popcorn, someone would pour the soda and the whole family would kick back in their PJ's to enjoy a movie at home.

These days, brick-and-mortar video stores are a dying breed. The DVD format, however, is still viable. DVDs often contain special material -- deleted scenes, commentary, interviews -- that gets stripped away when films are streamed online. For cinephiles especially, it's this added content that makes physical DVDs infinitely more attractive than online streaming.

Luckily, physical DVD rentals continue to be available, either by visiting a kiosk in person or by mail delivery. Movie services like Blockbuster, Netflix, Redbox and DVD Avenue serve up new releases and popular back-catalog hits, while sites like Green Cine, Tiger Cinema and Anime Takeout cater to niche audiences interested in art house, Asian or anime films. With rental prices as low as $1, DVD rentals remain a solid choice for budget movie buffs. But why pay even a buck when you can get your movie fix for free? We'll talk about DVD swap-and-loan services next.

By the 1740s, the first truly public United States libraries were springing up all over the northeast. Public libraries remain one of our nation's greatest treasures, serving up countless works of art, reference materials and literature to all knowledge-seeking individuals. In addition to books, these days, most public libraries also contain small treasure troves of cinematography. With a bit of patience and effort, movie buffs can gain access to lots of great movies by taking advantage of inter-library loan services.

Libraries aren't the only middlemen when it comes to loaning movies, however. Plenty of DVD exchange and swap services are also springing up. These loan-and-swap sites provide a portal through which people with movies can connect with people who want to watch movies.

TitleTrader, Swap.com, SwapAce and Neighborrow are all sites that let you list books, music and DVD/VHS movies that you're willing to swap. On TitleTrader, when someone requests a title from your catalog, you receive a credit that can be applied toward something you'd like receive. Sites like SwapAce also give you the option of buying and selling.

We've pretty much covered the (legal) ways movie buffs on a budget can find films to watch at home. For the true cinephiles, however, in-home viewing may never take the place of seeing a film on the big screen. Are there inexpensive ways to see films in theaters? Find out next. 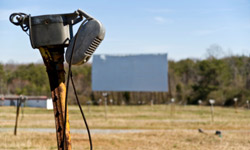 Most major cities and lots of smaller hamlets offer free or very low cost film festivals, outdoor screenings or even high-school film events. You just have to know how to find them.

There's no comprehensive online resource listing all the free film festivals and screening events in the country. Your best bet is to do some digging to hunt down events in your area. Web sites for chambers of commerce, public park systems and local film associations or schools are logical places to start. The New York City Department of Parks and Recreation, for example, provides a list of free summer movie events in New York's public parks on its Web site. Or, check to see if your region has a site like freefilmfestivals.org (based in London), which compiles information about upcoming local movie events. Social media is also a great place to hunt down free movie events in your area.

If streaming, renting, swapping, dollar theaters or free movie events don't satisfy your budget movie bug, there are still more ways to save. Find links to online discount sites like Groupon and Living Social, along with lots more information, on the next page.