10 Gadgets That Can Save You Money

Browse the article 10 Gadgets That Can Save You Money 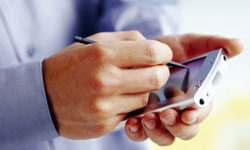 Lots of new and improved gadget will help you take control of your finances.
Brand X Pictures/Getty Images

You know that slurping sound of water going down the drain after you finish taking a shower? Well, it's not just water. If you aren't using a low-flow showerhead, that's the sound of money getting washed away.

This is just one example of money disappearing: On the following pages, you'll find a list of 10 gadgets designed to save you cash. Some of them make tried-and-true penny pinching strategies a little less daunting. Others take advantage of new technologies to find new solutions for old fiscal burdens. Some are so inexpensive and readily available that you could probably find one today. But one way or another, these 10 gadgets are intended to make your wallet a little bit thicker.

The electronics and appliances in our homes account for about 20 percent of personal energy use, according to the U.S. Department of Energy [source: U.S. Department of Energy]. But some gadgets can put a bigger drag on your electric bill than others, and nearly all continue drawing power even after they're turned off, a phenomenon known as standby power usage (or "vampire power," one of its more colorful nicknames).

If you want to find out which appliances are driving up your energy bill, you should consider buying an electricity usage monitor. After plugging a 120-volt alternating current (AC) appliance into the monitor and then plugging the monitor into the wall, the device provides data on how many kilowatt hours (or kWh, the unit of energy that electric companies use to determine your bill) you're using in a given time span. Some models allow users to enter their cost-per-kilowatt-hour to find out how much money they're spending. There is even an open-source device called the Tweet-a-watt that uses data from your monitor to make Twitter updates about how much energy your appliances use [source: Ganapati]. 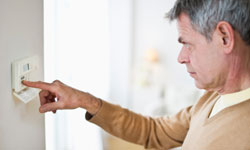 Save money and reduce your energy consumption at the same time.
Tom Grill/Photographer's Choice RF/Getty Images

Let's say you've been lured into a store by a can't-miss sale to find that perfect gift, but you have a suspicion that a better deal might be waiting across town or online. With a legion of free and cheap smartphone applications that compare prices, you don't have to rely on curiosity.

Apps like Red Laser, ShopSavvy and others use the built-in camera on many smartphones as a barcode scanner. You simply take a picture of the barcode stamped on the product, and the app instantly calls up prices for the same item at nearby retailers as well as online vendors. Some apps only require speaking the product's name into the smartphone to pull up a list of competitors' prices. Other applications, like Coupon Sherpa, trawl the Internet for coupons to your favorite stores. You can even save some money traveling to the store using apps like GasBuddy, which finds the best current gas prices based on your location. 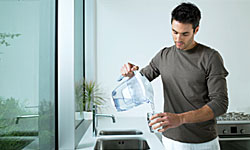 The water will taste better, too!
Michael Blann/Photodisc/Getty Images

Consider ditching the bottles and purchasing a water filtration system. Brita, PUR and other companies produce special faucets, water pitchers, dispensers and hand-held bottles specially outfitted to filter out chlorine, lead and other impurities from drinking water. These systems cost between $15 and $50, in addition to the cost of filters -- Brita filters, for example, cost about $8 and must be replaced after filtering 40 gallons of water [source: Brita]. That means that if you drink eight 8-ounce (0.24-liter) glasses a day for a total of 183 gallons (692.7 liters) of filtered water each year, you'd need to change the filter five times and spend less than $100. That's six times the average consumption of bottled water for about a third of the cost.

According to the EPA, each household uses about 30 gallons (133.6 liters)of water for showering each day [source: Environmental Protection Agency], totaling nearly 11,000 gallons (41,639.5 liters) per year. Low-flow showerheads, which flow at a rate of less than the 2 gallons (7.6 liters) per minute with a water pressure of 80 pounds per square inch, can cut water consumption by up to 60 percent [source: U.S. Department of Energy]. Reducing consumption limits the amount of energy devoted to heating that water, as well, which could save you up to 300 kilowatt hours of energy each year [source: EPA]. New low-flow showerheads generally cost less than $20.

By law, new standard-flow showerheads can't exceed 2.5 gallons (9.5 liters) per minute with a water pressure of 80 pounds per square inch, but some older models flow at more than twice this rate. Here's a simple test recommended by the Department of Energy to figure out if you should swap out your shower head: Use a bucket marked in gallon increments and put it under your showerhead. If it takes less than 20 seconds to fill the bucket, you would save money by installing a new shower head [source: U.S. Department of Energy]. 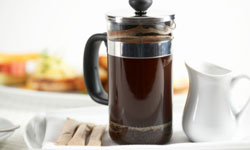 A French press is another lost-cow alternative if you'd like to make your own coffee.
Rob Melnychuk/Digital Vision/Getty Images

There's a good chance you love coffee. It's a daily habit for more than half of Americans over 18. And with the average brewed cup of coffee selling for $1.38, the cost can add up -- especially if you have more than three cups of coffee a day [source: Harvard School of Public Health].

A coffeemaker can be a convenience and an investment. Automatic drip coffeemakers, like Mr. Coffee, which brew pots of java by passing hot water through a filter filled with ground coffee, sell more than 14 million models every year [source: Consumer Reports]. The machines cost between $10 and $300. A 12-ounce (0.35-liter) bag of ground coffee costs between $5 and $15, and can make roughly 45 servings. That's about 33 cents a cup, plus the costs of milk, sugar and energy to power the device.

If you put a premium on variety, you might consider purchasing a single-serve coffee machine, which cost between $100 and $200, and brew coffee one cup at a time using pods that are pre-filled with coffee grounds. A 24-pack of pods costs under $16, bringing the cost of each cup to about 66 cents.

Does your cable bill seem like it's only getting more expensive? The cost of cable has risen 59 percent since 1996 [source: Tuttle], and the average monthly cable bill is about $75, according to CNN Money [source: Pepitone]. What if you're ready to give up cable -- but not your favorite TV shows?

There are several other services you can turn to. Streaming video services like Netflix charge a flat, $10 fee for unlimited access to a library of television shows and films, while Web sites for television networks and services like Hulu.com often allow free streaming of original programming. The iTunes online store allows a la carte downloading of television and films. Set-top boxes like Roku stream Web-based channels onto your television screen. According to Wired magazine, using a combination of a digital television antenna, streaming video services and television network Web sites, a set-top box, and a roughly $500 annual budget to download television shows from premium channels, you can knock a $1,643.16 cable bill down to $1,104.15 in the first year -- and the costs go even lower in each subsequent year. Be prepared to make a few sacrifices: It's hard to find a selection of sports programming to rival cable providers online, for example [source: Wired]. 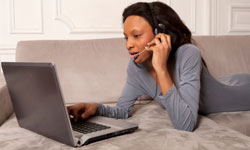 Instead of paying a bill for a landline, you could switch to a phone service that takes advantage of Voice over Internet Protocol (VoIP) -- a system that allows computer users to place phone calls from their computer to landline and mobile phone users -- and save some money on long-distance calling [source: Federal Communications Commission].

The magicJack USB adapter allows users to connect a normal telephone to their computer and make and receive unlimited calls to the U.S., Puerto Rico and Virgin Islands for $40 in the first year and $20 in each subsequent year. The software application Skype allows users to speak through a telephone handset or simply speak into their computer's microphone and make unlimited calls to North America for about $8 a month. Elsewhere, Google Voice allows you to dial numbers in the U.S. and Canada for free right from your Gmail account.

The nPower PEG, an acronym that means "personal energy generator," harnesses the energy generated as a person moves about and transfers it into a free, modest power source for electronic devices. The user carries the device in his or her pocket while walking around or exercising. Within the wand-shaped device, a weight jostles around to generate electricity in a series of coils to charge an internal battery. A port on the nPower PEG allows the user to connect to and charge personal electronics devices like cell phones or MP3 players.

It's a modest amount of energy, and the exchange rate isn't consistent. It takes about 26 minutes of walking to generate enough energy for the nPower PEG to generate one minute of phone time on a 3G mobile phone, but it can generate a minute of power for an iPod Nano with every minute of walking (more vigorous exercises like running create more energy, of course) [source: nPower PEG]. And while the energy it generates is free, the technology is not -- it retails for $159.99 from the manufacturer. 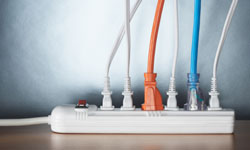 If you have the funds and the ambition, and you live in a windy part of the country, a residential wind turbine could cut your energy costs dramatically.

Here's how a wind turbine works: Gusts of wind spin a series of rotor blades mounted on top of a tower, driving a generator that transfers the wind's kinetic energy into AC power -- the same type of electricity that flows through your electrical sockets. The costs and returns of a residential wind turbine can vary widely, but according to the Sierra Club, equipment and installation of a 3-kilowatt wind turbine costs between $15,000 and $21,000, and can reduce your monthly electric bill by up to 60 percent. The turbines can last up to 30 years, and they can pay for themselves in as few as six years depending on the model, your area's wind generation and your electricity costs [source: Sierra Club].

There are significant drawbacks to wind turbines, though. Government subsidies can drive down their costs, but they're also subject to the collective will of lawmakers. If you're not connected to your local power grid, you'll need a back-up power source to keep the lights on when the wind isn't blowing. You need to navigate local zoning laws -- most ordinances have a height limit of 35 feet (10.7 meters), while the optimum height of a turbine is as high as 100 feet (30.5 meters) -- and you might need to pay for noise studies and other analyses before you can begin installation [source: Sierra Club].

For lots more information on money-saving gadgets, see the links on the next page.